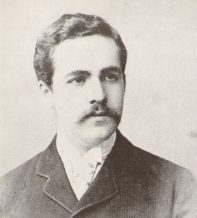 Born in Caracas of a Catholic Venezuelan mother and a Jewish German father, Reynaldo Hahn was the youngest child in a family of nine children who settled in Paris in 1878. At the age of 11, Reynaldo Hahn entered the Paris Music Conservatory where he became the student of Albert Lavignac and Jules Massenet for composition. At the age of 13, he had already written a famous melody « Si mes vers avaient des ailes » on a poem by Victor Hugo.

In the 1890’s, he regularly visited the Parisian salons (in particular the Halphen’s) where he sang his melodies and played the piano. He met celebrities such as Stéphane Mallarmé, Edmond de Goncourt and Marcel Proust who became his lover until 1896.

In 1914, on his request, he was sent to the front until 1916 and worked then in the ministry of war. This didn’t stop him from writing music. He received the Légion d’honneur in 1924.

Appointed singing teacher at the École normale de musique de Paris in 1920, Reynaldo Hahn worked with Pablo Casals, Jacques Thibaud and Nadia Boulanger. During that period between the two world wars, he wrote many operettas and musical comedies. But along with this mainstream music, he also returned to a musical genre that he had left behind, chamber music, with the piano quintet (1921), the sonata for violin and piano (1927) and two string quartets (1939).

Worried because of his Jewish origins, he left Paris in 1940 for Cannes and then Monte-Carlo. In 1945, back in Paris, he was elected member of the Academy of fine arts and became director of the Opera de Paris. Affected by a brain tumor, he died in Paris on January 28, 1947. He is buried in the Père-Lachaise cemetery.

Browse our archives on Reynaldo Hahn