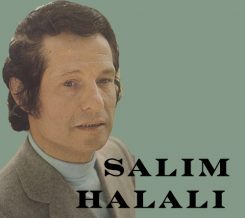 A great voice of Oriental music

Salim Halali, whose real name was Simon Halali, was a singer-songwriter of oriental music, born July 30, 1920 in Annaba, Algeria.

Born into a Jewish family from Souk Ahras, he grew up with his 9 brothers and sisters before leaving for France around 1937. It was first in the Parisian flamenco clubs that he made himself known. His meeting with the Algerian music-hall artist Mohamed el Kamel was important. The latter wrote the first songs of Salim Halali such as Andaloussia, Sevillane, Taâli, Ardjaâ lebladek, Bine el barah oua el youm, Mounira, Nadira, El ouchq saïb, El qelb chahik… Later on, Mohamed Iguerbouchène composed some fifty additional songs.

In 1938, Salim Halali began a European tour while at the same time his flamenco records in Arabic were a great success in North Africa, especially the songs Al ain zarga, Mahenni zine and Habibti samra.

Still before the war, Salim Halali performed at the Maure café of the Great Mosque of Paris, alongside renowned artists such as Ali Sriti and Ibrahim Salah. Kaddour Benghabrit, the founder and first rector of the Mosque, and intellectual and musician (oud and violin), would become a friend of Salim Halali, and during the German occupation, would help to hide his Jewish origins by providing him with a false Muslim certificate and engraving the name of his late father on an anonymous grave of the Moslem cemetery of Bobigny (Seine-Saint-Denis). [1]This anecdote is told in the film by Ismaël Feroukhi Free Men.

After the war, his music became very popular in Egypt, especially as performed by the great Egyptian diva Oum Kalsoum

In 1947, Salim Halali created an oriental cabaret, “Ismaïlia Folies” in Paris, in a mansion on the prestigious avenue Montaigne which belonged to Ferdinand de Lesseps. In 1948, he created a second entertainment venue, “Le Sérail”, rue du Colisée.

In 1949, he moved to Morocco and bought an old café in the mellah of Casablanca, which he transformed into a prestigious cabaret: “The Golden Rooster”. This venue was visited by the rich families of the country and celebrities. But “The Golden Rooster” was destroyed in a fire and Salim then returned to France, in Cannes, at the beginning of the 1960s.

Known for his attraction to extravagant evenings, he sometimes brought elephants to the gardens of his villa. In the early 1970s, his career took a new turn with a triumphal concert at the Salle Pleyel in Paris and the release of a French LP. In the years that followed, he performed regularly in Paris, Montreal and Casablanca. 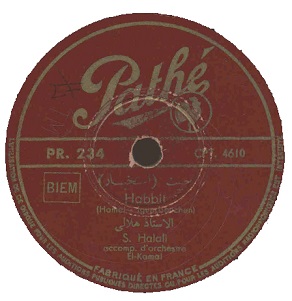 In 1993, he finally stopped singing and left for a retirement home in Vallauris. Nevertheless, he gave a final concert on the occasion of the new year 1994, at the insistence of his friend Maurice Wizmam.

A loner by choice – he forbade anyone to visit him, except for a few close friends – he died on June 25, 2005 in Antibes (Alpes-Maritimes). According to his last wishes, his ashes are scattered in Nice in the garden of memories.