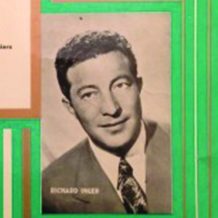 Richard Inger was born on January 2, 1915 in Germany. He studied singing in Vienna.
In 1942, he was deported to a concentration camp and owed his survival to his vocal talent. After the Liberation, he served in the French Foreign Legion, then in a special army unit in which he organized a concert for British and American troops in North Africa. Later on, he created his own “Riccardo Show”, performing for Allied occupation forces in Germany.
After his demobilization, he successfully toured England, France, Israel and the United States. During the 1950s, he emigrated to the United States, where he lived and worked until his death on July 27, 1980 in New York.