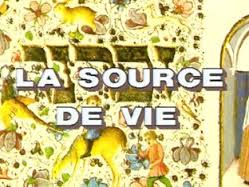 A TV program hosted by Josy Eisenberg, directed by Pascale Kenigsberg-Cahen, with the participation of the Od Yossef Haï Foundation. Featuring an excerpt of the concert “Jews and trouvères” performed by the Ensemble Alla Francesca on July 20, 2014, in Paris. With Hervé Roten, ethnomusicologist and director of the European Institute of Jewish Music.

In the Middle Ages, the minstrels songs were highly appreciated by the Jewish communities that were settled in the North of the Loire (Flandre, Picardie, Artois, Champagne …). Thanks to Hebrew manuscripts, copied at the end of the 13th century, we discovered texts of liturgical poems and songs written alternatively in the Oïl language and in Hebrew. At that time, Jews did not how to write music. But the copyist sometimes wrote the title of the melody on which was sung the text in the margin of the manuscript. These titles come from the minstrel’s repertoire, court poets who appeared at the end of the 12th century.

From a collection of songs gathered by Colette Sirat, prominent specialist of medieval Hebrew manuscripts, it’s an entire cultural world -festive, religious and popular – that we discover through surprisingly lively music. The songs from religious celebrations (Rosh Hashanah, Passover…) follow juicy wedding songs and their instrumental dances. The religious poetry (piyyutim) speak with emotion of the tragic fate of Jewish communities of this harsh period, situated between the burning of the Talmud (1242-1244) and the great expulsion of 1306.