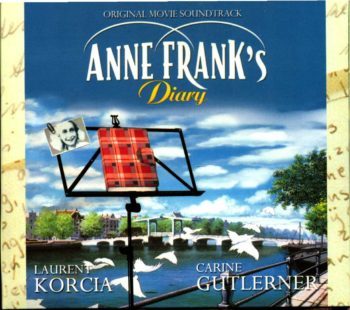 This record is available for listening in its entirety in the playlist below.

The producer Stéphane Dykman has invited the pianist and composer Carine GUTLERNER to propose a personal musical framework, with a main violin theme and developments for a chamber music ensemble: “I thought of a uncomplicated and deep music, played by ten or fifteen musicians, not more. I knew Carine Gutlerner and was convinced that she had the necessary qualities to write a score at the same time powerful and melodic. The score was developed over a period of 12 months ( exceptional in film work) and in narrow liaison with the adaptation. Several pieces have influenced the assembling of whole sequences, even playing an essential role in the telling of the story. We began by recording the music as such, without considering the requirements of the film, every piece in itself, without any cutting. In a second stage we then recorded them according to the specific needs of the movie.

The CD reflects this state of mind.

We brought together some of the best French soloists. Not only are they first class artists and virtuosi on their instrument, but also very creative, giving imagination and inspiration to their interpretation. Carine Gutlerner, who conducts and plays the piano parts, has an extraordinary sense for pictures, she also captured the very special and moving atmosphere of the diary.

Carine Gutlerner dedicates this music to her father and the victims of the Holocaust.

French violinist. Recorded the music for the film on a Stradivarius “Zahn” from 1719.

Winner of numerous competitions including the “Paganini” at the age of 18, Grand Prix of the Jacques Thibaud competition, soloist with the greatest French and foreign orchestras. He has recorded Ysaye’s sonatas for solo violin, a “Bartók” (Lyrinx) and “the violin of Central Europe” (with Georges Pludermacher at the piano – BMG/RCA). Virtuosity, inventiveness, fiery temperament. Laurent Korcia plays on a Stradivarius – the “Zahn” – lent by LVMH.

French cellist. Recorded the music for the film on a Matteo Gofriller from 1710.

Numerous prizes including the Rostropovitch competition (1990). Choc de la musique for his sonatas by Schnittke, Shostakovich and Prokofiev with the pianist Hüseyin Sermet (Harmonia Mundi). Regularly plays with the world’s leading orchestras. Tour in Japan with Laurent Korcia and Jean-Marc Luisada.

Flautist. First great prize in the Jean-Pierre Rampal International Flute Competition in 1987. The only French winner of this prestigious competition since its creation, he is considered one of the most brilliant representatives of the French flute school.

And the other musicians: Hervé Joulain, a member of the Paris-Bastille Wind Quartet, as well as Olivier Doise, Romain Guyot and Jean François Duquesnoy, each of whom has a solo career. Florence Roussin and Vinciane Béranger are members of the Quatuor Cosi. Emmanuelle Bertrand, first prize winner of the Japan Chamber Music Competition and of the Maurice Ravel International Academy. Bernard Cazauran, double bass teacher at the CNSM in Lyon, has played with the Orchestre de Paris under the direction of Solti, Berstein and Barenboim, and premiered the Henri Dutilleux dyptique. Christine Icart is considered one of the best harpists of her generation. Eric Sammut is a member of the Orchestre de Paris. Ariane Jacob, who is a pianist, has kindly lent her assistance for the celesta parts.

Production committee Images from the Making of © Stéphane Dykman