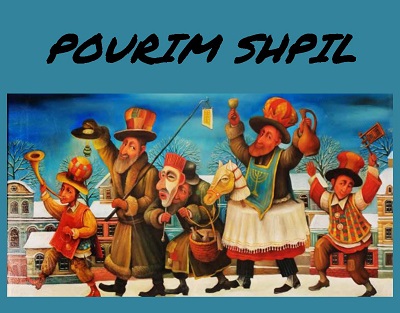 The Purim Shpil – etymologically “Purim play” in Yiddish – is a satirical performance that blends theater, music, dance, songs, mimes and disguises.
The origin of this custom is intimately related to the carnival festival of Purim and the story of Queen Esther and her uncle Mordekhay who managed to thwart the plot of the evil Haman, Minister of the Persian king Ahasuerus, who wanted to annihilate the Jewish people.

The origin of the events told in the scroll of Esther, the last book of the Hebrew Bible to have been canonized, dates back to approximately the fifth century BCE. From the fifth century AD, it is already customary to perform solemn processions in which an effigy of Haman is hanged or burned. Some see in this custom the origin of the Purim performances on the basis of which Yiddish theater was to develop in the eighteenth century.

In his speech, delivered during the presentation of the Purim Shpil Unesco project at the Paris City Hall on December 12, 2013, Jean Baumgarten emphasized the special spirit of this festival:
“[…] this time of excess, of rebellion, rhythmed by dances, songs, punctuated by food, binge and drinking. No society escapes this alternation of the sacred and the profane, this sway between, on the one hand, outrage, sacrilege, disorder and, on the other, respect for the law, social norms and prohibitions.
In Jewish society, the time of the feast corresponds to Purim […]. This rejoicing celebrates the rescue of the Jews by Mordekhay and Esther who thwarted the plot of the wicked Haman, minister of Ahasuerus, the king of Persia who wanted to annihilate the Jewish people. The Megillat Esther tells this diabolical plot and its happy ending. […] The day is also punctuated by a series of festive moments. One drinks until, says the Talmud, one cannot distinguish between “cursed is Haman” and “blessed be Mordekhay. ” We laugh. We sing. We Dance. The study is suspended. We exchange gifts, we offer cakes. Charity is practiced, especially by giving to the poor. We eat, especially during a festive meal. We disguise. As it is the only day of the Hebrew calendar during which he is allowed to change sex, men borrow the clothes of their mothers, sisters and wives. […] Among these transgressive rituals is the Purim Shpil. It is a monologue, a skit, a play in Yiddish in the domestic space during the Purim meal or in a community room. […]
The Purim Shpil tradition has developed in Europe since the late Middle Ages to the present day, testimony to its central role in Ashkenazi culture. We find the first testimony in Yiddish language in Italy in 1555. Which does not mean that the Purim Shpil did not exist before. […]
These burlesque plays, linked to the feast of Purim, a mixture of singing, mime, pantomime and dance become the matrix of Jewish theater. The Yiddish language, because of its inventiveness, its creativity, its long literary tradition, its rich repertoire of poems and songs, played a major role in the formation of the Purim plays. […]

Di Megile fun Itsik Manger
The Meguila of Itsik Manger is certainly the best-known story linked to Esther’s scroll. In 1936, Itsik Manger published his Megile-lider (Chants on the Roll of Esther), about thirty imagined and poeticized small scenes, telling the story of Purim, but including humorous aspects, funny, and even provocative 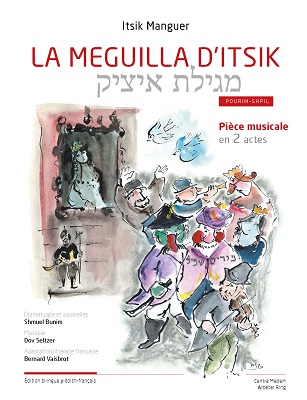 Watch above an excerpt from the show La Meguilla d’Itsik directed by Rafael Goldwaser in Yiddish and French, which took place in Medem Center in April 2015. (Filmed by Bernard Flam)

Haman’s downfall is a play « written in 1940 by Haïm Slovès (1905 – 1988). Deeply modified during the Liberation, the play was performed by the best artists from the Yiddish theater just after the war, in particular by Oscar Fessler and Zygmunt Turkow. Between 1946 and 1949, it was performed several times in Paris, New York, Los Angeles, Wroclaw, Rio de Janeiro and Buenos Aires. » (yiddishteater.org)

As for Itsik Manger’s Meguila, Sloves’ play sees new characters, and the classic characters being changed. Thus Mordekhay has become a matchmaker, and is an old friend of one of the king’s guards. A loyfer, or « Ringmaster » is also present to speak to the audience, introduce the characters. He even intercedes with King Ahasuerus, trying to dissuade him from making a bad decision…

This Purim Shpil has something special. Written during the Second World War, and played in the immediate aftermath of the war, the reference to Nazism, and Haman’s comparison with Hitler, is obvious. And the end of the play, although performed with an absurd folk dance worthy of Purim Shpiln, does not fail to say its moral:

Pourim iz a shpil aza
Purim is such a play is a musical poem written in Yiddish by Mirl Hofman (who then used the pen name Gabriel Tolies), published in 1968 in New-York, and which the music was composed by Malke Gotlib, (sister of Chane Mlotek, great Yiddish song collector). This children’s story was written in a simple language in order for the little ones to better understand the meaning. For example, when Haman sees Mordekhay being a frequent guest to the king, he hastens to warn him, that Mordekhay will make him « Hocus-Pokus », and that he’ll « transform him into a cuckoo ». This very nice book was illustrated by Tsirl Valetski, and contains lyrics in Yiddish, melody, and a small lexical of several words in Yiddish and transliterated. 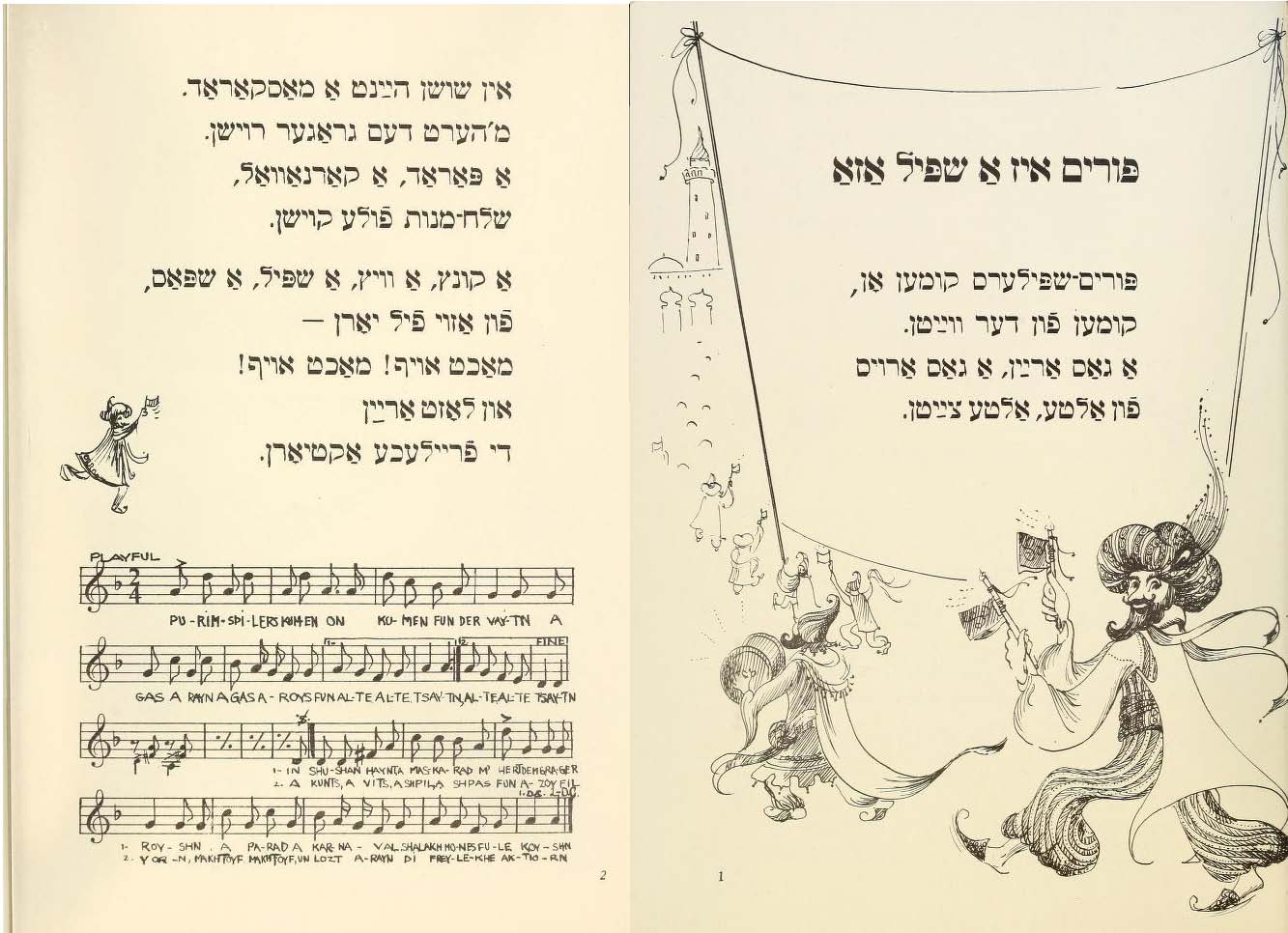 Esther de Carpentras
Inspired by the Purim Shpil, Esther from Carpentras is an opera-bouffe in 2 acts, whose libretto was written by Armand Lunel, and the music composed by Darius Milhaud. The opera was performed for the first time on February 1, 1938 at the Opéra-Comique in Paris. 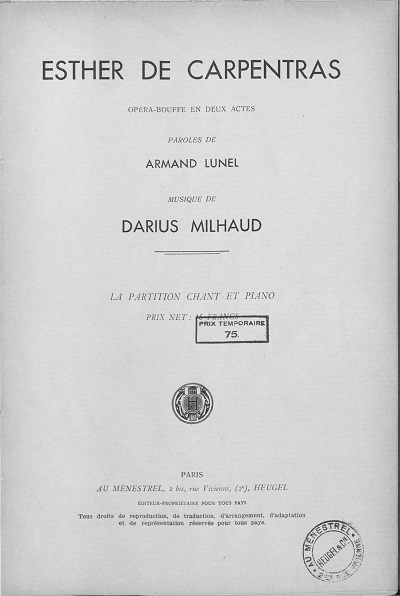 Here is what Armand Lunel wrote in the major independent daily Ce Soir, January 30, 1938 :
« Writing Esther de Carpentras, we were inspired by a traditional model that dates back to the Middle Ages. Every year, in March, the Jews celebrate in the synagogue the feast of Purim, which recalls the miraculous intervention of Queen Esther with King Ahasuerus to deliver the Israelites from the persecution of his minister Haman, who had set by lot the date of their massacre. But in the time of the ghettos, Purim was a real public holiday, and even a kind of carnival. Until the late eighteenth century, the Jews of Carpentras organized, on this occasion, popular performances of the Bible legend, which took place in the open air, on the main square of the Juiverie. These pieces were first written in Hebrew, then in Provençal; they have been compared to the mysteries of the Middle Ages, for the tone of the joke and delicious naïvets were allied here naturally with religious solemnity and formed, a little as in the Provencal Pastorales a very tasty mixture.

[…]The first act forms a prologue in which we see three old Jews from the Carpentras ghetto: Artaban, financier, Barbacan, concierge of the synagogue, and Cacan, a theater lover, coming in delegation to the cardinal-bishop of the city to ask permission, according to custom, to perform the next day the drama of Esther. In the antechamber of the bishopric, they are at first received rather badly by Vaucluse, the valet of the cardinal. This Vaucluse has always had a very innocent temptation: that of converting the Jews of the Venetian county by singing to them Christmas carols which he composes at his hours of leisure; […] Since he (the cardinal-bishop) has just arrived from Rome, he is quite surprised to discover Jews of such a singular type in Carpentras; […] But as soon as they are gone, he promises himself to take advantage of this performance of Queen Esther to do even better than Vaucluse and to attempt a mass conversion of all the Jews of the city. » Armand Lunel 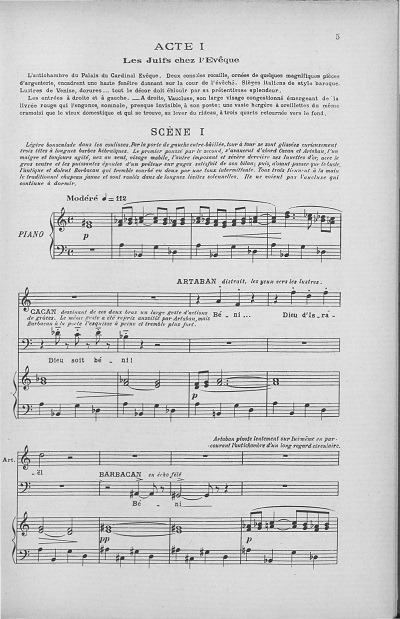 In this description of the 1st act, we find all the codes of the Purim Shpil: the deformations of the Biblical characters (in the second act, Artaban takes the role of Ahasuerus, Barbacan that of Mordekhay …), this technique of “theater in the theater “, a slight black humor, with this valet composing Christmas carols in his spare time …

The show ends fortunately well, as explained by Armand Lunel in his presentation: “The drama ends with a double chorus: on one side that of the chapter which comes to fetch the bishop, on the other that of the Jews who thank the Lord. Everything thus returns to order; for in the eve of Juiverie de Carpentras, under this southern and tolerant sky, the voices of the Old and New Testaments could have resounded for long centuries without the slightest false note. “

Look at the website of the Troïm Teater
Learn more about La Meguilla d’Itsik, published by the Centre Medem Arbeter Ring
Listen to the radio program of the EIJM dedicated to the Purim Shpil, hosted by hervé Roten, with Bernard Vaisbrot