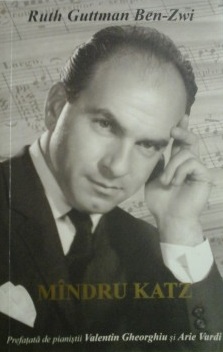 This book written by Ruth Guttman Ben-Zwi is a biography of the Romanian pianist Mindru Katz (1925-1978).

Mindru Katz was born in 1925 from Jewish parents. A child prodigy, he was discovered by the famous composer George Enescu and followed the teachings of Florica Musicescu. He was graduate from the Bucharest royal academy of music in 1947, the year where he began performing with the Bucharest phiharmonic orchestra.

A brilliant international career led him to perform in many countries, solo concerts but also under the direction of conductors such as Antal Dorati, Sergiu Celibidache, Lorin Maazel, etc.

Katz emigrated in Israel in 1959. He joined the Rubin music academy in Tel Aviv, and became a piano teacher in 1972. His best pupils were Mordecai Shehori, Astrith Baltsan and Angela Borochov (born Angela Stone).

He passed away on stage at the age of 52, while performing the sonata “Le destin” (fate) by Beethoven.