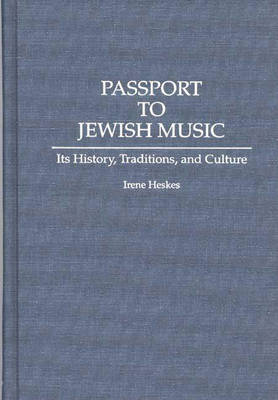 Its History, Traditions and Culture

The 27 chapters of this book by the musicologist Irene Heskes describe the various historic periods of Jewish music, since the Biblical times until modern period, the various concerned geographical areas, and feature portraits of several famous Jewish composers, especially some born or who lived in USA (Bernstein, Gershwin, Milhaud…).

This book is the result of several decades of work and study of the author on  this subject.

Irene Heskes is a musicologist who specialized in the study of Jewish music. She wrote many articles for musicologic magazines and other in America, Europe and Israël. She also contributed to the ’Encyclopedia Judaica, and the books Musical Theater in America (Greenwood, 1984), and Handbook of Holocaust Literature (Greenwood, 1993). Among her books, let’s mention : Studies in Jewish Music (1971), Jews in Music (1974), Ernest Bloch: Creative Spirit (1976), The Resource Book of Jewish Music (Greenwood, 1985), The Music of Abraham Goldfaden (1990), The Golden Age of Cantors (1991), and Yiddish-American Popular Songs, 1895 to 1950 (1992).