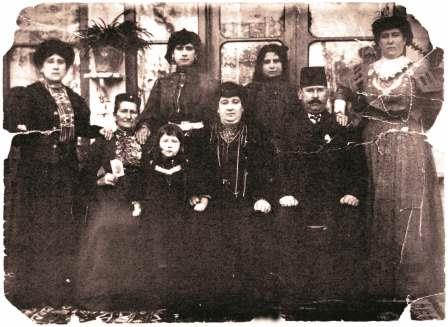 Etymology
Sefarad means Spain in Hebrew. This word designates the descendants of the Jews expelled from Spain in 1492, following the fall of Grenade’s kingdom, final episode of the Christian recapture of the Iberian Peninsula. In a wider aspect, the word sefarad includes all the Jewish communities of the Arab-Muslim and North-African world, even though these communities were composed of African Jews who came from Berber tribes who had been Judaized since the Antiquity, and not expelled from Spain in the 15th century.

The Sefarad songs cover these two definitions: songs of the exiles from Spain, passed and enriched through centuries by the communities born from this diaspora, and more widely, profane or religious played by the Eastern Jews.

Historic route
One cannot study the music of Sefardi Jews, in the etymological meaning, which means native from the Iberian Peninsula before their expel from Spain (1492) and Portugal (1497), without recalling the importance of Jewish culture in Medieval Spain. At that time, Jews, who were in contact with the Arab culture, developed their activities in various fields such as economy, science and arts. They often have an important function in the Spanish Medieval society, such as doctor, philosophe [Maïmonide (1135-1204)] or poet [Salomon Ibn Gabirol (around. 1020-1057), Judah Halévi (around. 1075-1141), etc.]. From the Middle-Ages until the 15th century, it is also mentioned that Jewish musicians were employed in various Christian or Arab courts. The Christian kings of Spain had moreover a high esteem for Jewish musicians.

But in 1492, after a century of persecutions and forced conversions, Queen Isabelle the Catholic enacted a decree to expel all Jews from Spain. In 1497, King Manuel the 1st of Portugal extends this decree to his Jewish subjects. Forced to leave, the Sefardi Jews became refugees in Protestant land (England, Germany, Dutch and English colonies…) and most of all in Islamic countries (Ottoman Empire and North Africa), bringing with them a very old culture they will keep jealously.

This is why, five centuries after the expelling, we still find today Sefardi Jews who speak Judeo-Spanish, that old Castilian language of the 15th century. But until when?

The Judeo-Spanish repertoire
Descendants of Jews from Spain, this people tried to keep a part of their Spanish tradition through language and music, mostly given orally, in particular for the repertoire of the coplas, romances and cantigas.
All along its exile, Judeo-Spanish culture have been exposed to many influences of countries crossed through, or settled in. The energy of the Sefardi Cancionero (singer or songwriter) is not a new phenomenon. As we know it today, Judeo-Spanish music is a mosaic where sacred coexists with profane, Jewish with non-Jewish topics, old with new.

This is how in some Judeo-Spanish cantigas, we can hear opera melodies from the 19th century, zarzuelas, fox-trot rhythms, tangos, waltzes, and very old Spanish texts along with modern translations of popular songs from Turkey, Greece or Italy.

Since the beginning of the 20th century, the Sefardi communities, influenced in particular by the education system of Universal Israelite Alliance, have been sensitive to European traditions like singing in canon, brass bands and music-hall. We can even notice instrumental music replacing traditional singers.
At the beginning of the 20th century, the composers are greatly interested in traditional music, and this interest leads to the creation of many music pieces inspired by these various traditions.

Judeo-Spanish culture never generated as much projects, dreams and creations. It is because the feeling of urgency that took many descendants of Sefardi families pushed them to act, and to get hold of all the pieces of this gigantic puzzle: language, cooking, poetry, literature, and moreover a way of being and seeing the world, a way of “living together”.
Many researchers studied this side of Jewish heritage, such as Edwin Seroussi, Jessica Roda, Judith Cohen or Susana Weich-Shahak who did a remarkable work of collecting and research on the music accompanying the different moments of life in Judeo-Spanish communities around the Oriental Mediterranean Sea, from birth to death, passing by lullabies, children songs, wedding songs…

The renewal of Judeo-Spanish songs
These past few years, Judeo-Spanish music live a great renewal, with the emerging of a new generation of artists, firmly determined to shake the repertoire of traditional songs. Therefore can we hear Electro-Sefardi music, a significate example of the phenomenon of modernization and re-appropriating of Judeo-Spanish music.