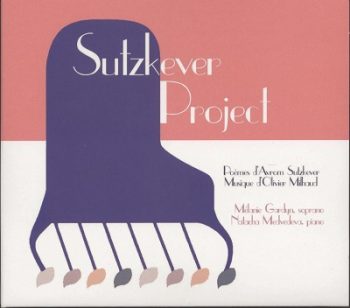 The CD Sutzkever Project was created in 2010 when the composer Olivier Milhaud, grand-nephew of Darius Milhaud, met the Yiddish teacher and translator Batia Baum. During this meeting, Batia Baum speaks of the personality and fascinating work of the poet Avrom Sutzkever. A mind-blowing work in which the poet sees stars in the gutters of Vilno’s ghetto, or dreams of a sunset in his own blood mixed with lime. Sutzkever’s Yiddish poetry thus foils the atrocity by recreating the world with an interjection of life and beauty…

Seduced by the texts of this great poet, Olivier Milhaud felt the need to write music on it. And it’s with his meeting, in 2015, with the singer Mélanie Gardyn and in 2016 with the pianist Natacha Medvedeva that the Sutzkever Project will see light, and will receive in 2017 the 1st prize of the Amsterdam’s International Festival of Jewish Music as well as the Mira Rafalowicz award for best Yiddish performance. 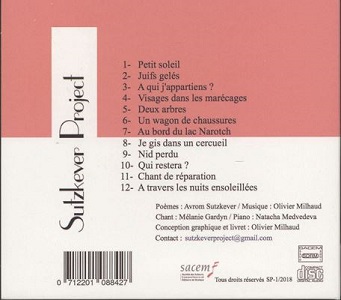 The CD Sutzkever Project, released in 2018, gathers 12 poems by Avrom Sutzkever that refer to very different themes and universes: the Siberian nature linked to a father’s death (Sibir), nature incarnated in two loving and fusional trees, (tsvey beymer), an abandoned nest (Di farloyrene nest), the prayer and memory of a grand-father (Tikn os), the Genesis and fall of heaven (Der boym fun lebn, Der boym fun visn),the horror, transfigured in a kind of paint-poem, of vision (Farfroyrene yidn, ikh lig in an orn), the horror again in a cynical melody (A vogn shikh), the hallucination of a sunset in lime as a poem’s verses (Di sturmisten) or the disillusion of a time (Penemer in zumpn), a mystical interrogation (Tsou vemen geher ikh ?), words that come to life – the fiddle-rose (Di fidlroyz), an appearance or a dream ? – the dancer (Di tentserin).

Olivier Milhaud’s music, inspired by Jewish liturgy, and wonderfully served by Mélanie Gardyn and Natacha Medvedeva, inscribes itself in the lineage of Bloch, Ravel, Eisler, Shostakovich…