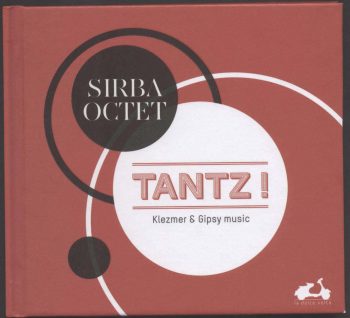 An outstanding journey into klezmer and gipsy music!

Inspired by the migration both of people and of their music, this Sirba Octet opus forms a kind of bridge between Romania, Moldova, Russia and Hungary and their rich, interwoven treasuries of traditional folk music.

Tantz! means dance in Yiddish and this title eludes to the emotion, elegance and vigour of the show itself. With pieces characterised by the traditional themes of Doina, Hora and Sirba, Tantz! captures the spirit of village wedding parties where travelling klezmorim and folk bands would set the celebratory mood with their music. The album was released in October 2015 on La Dolce Vita label and won a Choc Classica. The release was followed by five promotional performances at l’Espace Pierre Cardin in Paris and later went on tour. Tantz! has since been performed in leading concert halls in France and abroad. The octet’s fifth album is signed and supported by the iconic, virtuoso violinist Ivry Gitlis.

“Tantz! has its roots in the Eastern Europe of my grandparents before they emigrated nearly 100 years ago. I wanted to rediscover this intrinsic element of my cultural orientation by revisiting this music as the classical musician I am today.”
Richard Schmoucler, artistic director