El Kahlaoui Tounsi, whose real name was Elie Touitou, was born in Tunis on January 24, 1932. He spent his childhood in the popular neighborhoods which had a strong artistic activity, and he was attracted very young to music and singing, with a preference for the rhythm, percussions and the darbukah.

When the Egyptian movie Rabha was screened in Tunis, the song Fadlak Ya Sayeg El Matar, performed by the Egyptian singer Mohamed El Kahlaoui, met a big success. Young Elie, who loved it, learned it and sang it for various occasions. Following this, friends of his pushed him to present himself at the Tunisian Radio. Elie performed the song Fadlak Ya Sayeg El Matar in its entirety and he was warmly encouraged by Abdelaziz Laroui, the host of the TV show Le Coin des Amateurs, who suggested him to call himself « El Kahlaoui Tounsi » from now on. 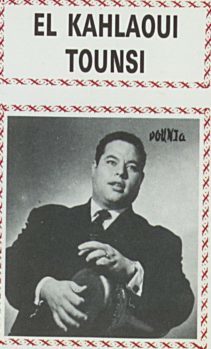 El Kahlaoui Tounsi started thus a musical carreer as a singer, and performed with the famous band of that time, such as the ones led by Kakino De Paz, Cheikh El Asram and many others. He became famous and the public loved him. His beginnings in the Eastern singing, added to the Tunisian singing, allowed him to build a large repertoire. During his tours, in foreign countries, he focused on traditional and popular Tunisian songs.

By the end of 1948, he travelled to Paris to work as a percussionist with the Peters Sisters in the Folies Bergère, and tried a first musical adventure in France. In 1949, he returned to Tunisia where he learned Eastern music mixed with a new music in fashion: jazz. To improve his science of rhythm, he travelled in North Africa, from Algeria to Libya. 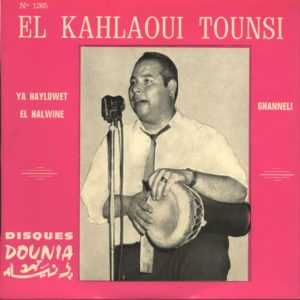 Back in Paris at the end of 1951, El Kahlaoui Tounsi got hired in the cabaret El Djazaïr in the Latin Quarter. He stayed there two years as a singer and a percussionist. He took part in many recordings on the French radio with several bands from Algeria, Kabylia, Morocco, Tunisia and France. He also recorded many songs under various music labels : Pathé Marconi, Philips, Teppaz, Barclay and Dounia which he bought in 1960.

In 1953, he got hired at the Radio Diffusion Tunisienne as a drummer and percussionist in the Philharmonic Orchestra. Meanwhile, to improve his musical knowledge, he took part in some folkloric bands specialized in Bedouin music, « stambali et rebaibia » of which the specific instruments – zoukrah, mezoued, bendir, darboukah and chkacheks – feature a sound representative of ancient Bedouin Tunisia. 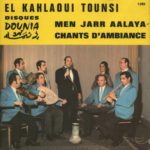 In 1954, after a concert tour in the United States, he settled with his family in Paris, where he published his first 45 rpm disc. He continued his trips to Japan, Australia, Africa, Algeria, Morocco and all the Europeans countries, teaching and spreading the Tunisian songs and art, the « Aroubi » in particular, a sort of pre-musical incantation which plunges its roots into the Andalusian tradition passed on through centuries by the Sephardi storytellers.

El Kahlaoui Tounsi wrote music for many Tunisian, Moroccan and Libanese musicians. He worked toward the birth of a young Algerian singer, who would later become a star called Warda.

Founder of a big orchestra, Kahlaoui regularly welcomed most of the stars from the Arabic world who wished to perform in France : the Libanese Wadieh El Safi, the Egyptian Ahmed Adaouia, the Syrian Sabah Fahkri and the Tunisian Ahmed Hamza. 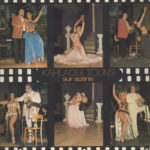 He performed with his friend Enrico Macias on the stage of the Olympia and recorded on his music label Dounia most of the Jewish and Arabic artists, such as Raoul Journo, Line Monty, René Perez, Reinette l’Oranaise, Blond Blond … and even the famous Farid El Atrache with whom he became great friends. A successful author and composer (500 songs in his whole repertoire, 230 of which he is the author and 150 of which he is the composer and arranger), El Kahlaoui Tounsi was also a businessman. Already owner of a music label and a disc company, he bought a first theatre in 1975, the Palais Bergère, and a second one in 1976, the Bataclan. He also bought in 1977 a small recording studio… 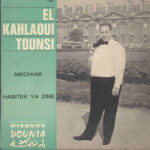 El Kahlaoui Tounsi was one of the masters of music and song of the Jewish Tunisian community of the 20th century, like Raoul Journo, Hana Rached, and their predecessors Cheikh El Afrit, Habiba Messika, or Mouni Jebali.

El Kahlaoui Tounsi is the only Jewish Tunisian artist, with Raoul Journo, to have been rewarded for his contribution to Judeo-Tunisian music in Tunisia, but also in Israel and in France, where he received a medal of Chevalier des Arts et Lettres

More about the Dounia label