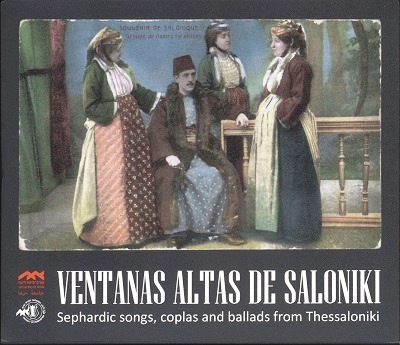 Among the Jewish communities settled around the Mediterranean sea, after the expulsion of the Jews from the Iberian Peninsula, the community of Salonica occupies a special place by its demographic importance and by the intensity of the social and cultural exchanges that have developed there. In 1906, Jews represented almost half of the city’s population, 47,312 Jews out of an estimated population of 98,930. The massive deportation of the Salonic Jews by the Nazis in 1943 marked the end of a Jewish presence attested in the New Testament in the first century of the Christian era.

The double CD Ventanas altas by Saloniki – Sephardic songs, coplas and ballads from Thessaloniki gathers songs from research and field recordings made by Susana Weich-Shahak, a teacher at Haifa University, since 1975. These recordings find a new life thanks to the performances of the singers Orit Perlman and Kobi Zarco accompanied by student musicians from the University of Haifa.

The first CD is dedicated to the traditional genres of the Sephardic repertoire: the cantigas, romanceros and coplas. The second CD, which demonstrates the vitality of this tradition to this day, includes songs composed in the 20th century, in particular adaptations of popular songs on new texts in Ladino, or tunes belonging to the Sephardic theatrical repertoire. Finally some songs describe historical events that affected Jews during the 20th century.

This double CD is accompanied by a beautiful booklet containing information on the history of the Jewish community of Salonica, the traditional language of the Jews of Salonica, and the songs of the repertoire.

2 CDs, 2 hours of music to listen alone or with friends.