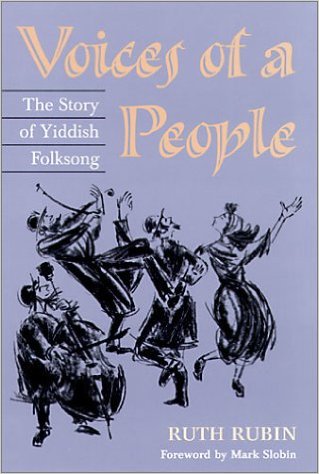 Voices of a People is an accessible and well documented work. A sensitive painting on the relations between hundreds of Yiddish songs (with English translations from the author),and the culture which saw they appear, it is today the most important book about Yiddish songs.

As told by Mark Slobin, if the book contains errors, particularly on the musicological analysis, and does not present music transcriptions, “it allows to open a window on a corpus of European songs neglected by ethnomusicology” (Ethnomusicology Vol. 25, No. 1 (Jan., 1981), pp. 135-136).

Ruth Rubin (1906-2000) brought a major contribution in the collecting of Yiddish songs, in particular after the war, among survivors from the Holocaust, in North America.