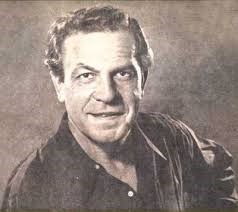 Ben-Zion Witler (or Ben-Tsion Vitler, or also BenZion Wittler), was born in 1907 in Belz, in Galicia, and died in 1961. He was a singer, but also an actor and composer.
At the age of 6, he left Belz with his family, and went to Vienna, where he got a strict chassidic religious education. Fearing his family’s reaction, he joined secretly under a pen-name the « Jewish Free Theatre » at the age of 12. He worked briefly as a journalist in the German Zionist weekly newspaper Wiener Morgenzeitung, but in 1926, he returned to Vienna’s stage to perform comedies and operettas. He also studied opera repertoire with Yulianovsky and Fuchs and participated in tours in Paris, London, and South Africa.

In the middle of the 1930’s, he spent three years in Poland, where he became the « audience favorite ». In 1937, he performed in Riga in the play A Khasene in Shtetl and in The Galician Wedding by William Siegel. Among many other roles and plays, we can mention Yanko the Gipsy, A Millionaire’s Caprice, The American Litvak, The Brave Officer, The Bandit Gentleman, The Strength of Love, The Bride with Three Brothers, The Golden Bridegroom, The Threshold of Joy, It’s Hard to be a Jew by Sholom Aleichem, The Dybbuck by Shalom Ansky, God, Man and Devil by Jacob Mikhailovich Gordin, and Yankel the Smith by David Pinski.

From 1940 on, he performed in USA, in particular New York, in the Hopkinson theatre, in Forgotten Women, by William Siegel, and in Chicago, in the Douglas theatre in A Golden Dream, by the same author.

In 1946, year of birth of another great man, he performed in Buenos Aires, Argentina, in the Mitre theatre, in Home Sweet Home, by Kalmanovitsh. He performed with his wife, Shifra Lerer, an actress born in Argentina, until the 1950’s, in North and South America, Israel and in South Africa.

He recorded hundreds of songs, among which the most known :