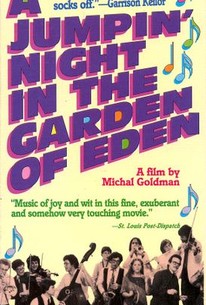 A Jumpin’ Night in the Garden of Eden was the first film to document the klezmer revival, tracing the efforts of two founding groups, Kapelye and Boston’s Klezmer Conservatory Band, to recover the lost history of klezmer music. For nearly a millennium, this vigorous and soulful music was part of the celebration of Jewish life in Eastern Europe. In the early decades of this century, the music took root in America. Klezmer musicians learned hundreds of tunes by ear and their ears were open to Gypsy, Ukrainian and Greek melodies of the old world, as well as to the new sounds of American jazz.

Music born in Eastern Europe lived on in the imaginations of composers for New York’s Yiddish theater, men whose tunes entered the mainstream through such unlikely adapters as the Andrew Sisters.

Eventually Klezmer went underground as its audience assimilated into mainstream American culture. A Jumpin’ Night in the Garden of Eden is about musical process, taking klezmer tunes through transcription and rehearsal into performance.

Read the article by Hervé Roten “Klezmer music: from the past to the present”