"The man of the book"

Benyamin Rafael ben Yosef was born in 1870 in Adrianople (today Edirne), in Turkey. He comes, on his mother’s side, from a lineage of rabbis, among them Behmohar Rafael (1815-1878), great rabbi of Andrinople and then great rabbi ex officio of Philippopoli (Roumélie in Bulgaria).
In love with books and old manuscripts, he dedicated his life to djudezmo, this language more and more limited to the family circle, which combines many words of Turkish, Italian and French origins.

After his wedding, around 1895, he settled down in Balat, a Jewish neighborhood of Constantinople (Istanbul) situated on the European shore of the Bosporus.
Considered to be the most important editor of Constantinople during the first three decades of the XXe century, his activity as a printer-editor begins in 1898 with the publication of Sefer me-’Am Lo’ez Ester.
During that period, people felt the need to adapt and/or translate into Judeo-Spanish many books of all literary genres, among them novels – Paul et Virginie, Jardin des histoires, Le fils repenti, Les deux jumeaux, Don Miguel San Salvador, Le neveu maudit, Salvator et Paolina, Juan Lobo, La belle histoire de Robinson ou Le veau d’or – generally first published in newspapers as serials.

Apart from his known activity of editor, Benyamin Rafael ben Yosef was a collector of manuscripts and old books, a task that he developed during his travels, in particular in the Middle-East.

The field of religion and liturgical chant was one of Benyamin’s favorite themes.
In 1910, he published the Sefer jaim va-jesed (collection of laws and customs concerning the sick and the dead) in Constantinople ; it will be followed by the publication of the Sefer renanot u-bakashot, thirteen years later.

Passionate for Sefardi liturgical chants, in particular the piyutim and maftirim, in 1926 Benyamin asked Isaac Eliyahu Navon, (poet, musician, homonym of the politician), a native of the same town, to make the most complete inventory of known maftirim. The impressive publication of « Songs of Israel in Eastern land » (Shire Israel be-Eretz ha-Kedem or SHIBA) will receive a very positive critique among religious circles, poets and musicians.

One of the title-page in Judeo-Spanish :

*« Several songs collected from old manuscripts. Works of poets with songs from Sabbath, moadim of the year, mila and weddings » 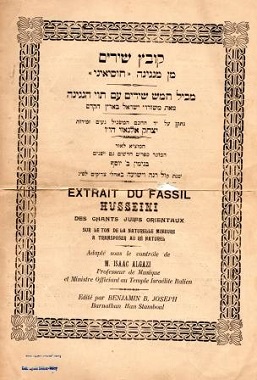 During the same period, under the control of the famous cantor Isaac ben Solomon Algazi, and musical director of the Italian synagogue of Istanbul in the neighborhood of Galata, Benyamin Rafael ben Yosef published a selection of Eastern Jewish chants, entitled « Excerpt of fassil Husseini » : these songs include the reference to the liturgical poet Yisrael Najara and the famous rabbi of Smyrne Abraham Ha-Cohen Ariyas.

Until his final years, Benyamin will continue to publish religious songs. Los piyutim de los dias temerosos, dated from 1927, will appear only after his death (Printing company La Konkerensia).
He will also publish collections of romansas, (songs and poems for brides, new-born and their mothers), published according to the customs of the Ottoman Empire.

In parallel with the publications and adaptations of “classical” literature, publications in religious fields, and publications of “traditional” songs in djudezmo, Benyamin will also translate into Judeo-Spanish books about social-politics, as for example Cinco anyos de mi vida, that discusses the Dreyfus affair. What a surprise to find in djudezmo the letter exchanges between Dreyfus and his wife Lucie. Indeed, after the impacts of the Dreyfus affair, many clients of Benyamin will ask him for the “Judeo-Spanish version” of this story.

In the particular context of the erasure of cultural identities, Benyamin Rafael ben Yosef, important contributor to the Sefardi culture and its diffusion, passes away abruptly in 1928.