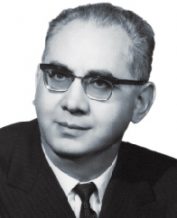 Born on January 16th 1918 in Radom, a Polish town about 100 kilometers from Warsaw, Shalom Berlinski was the youngest son in a family of eight children. His father was a shoemaker, he liked to sing in the synagogue and played violin for his own pleasure.

As a child Shalom Berlinski went to the synagogue and imitated the vocalizations of the cantor. At 8 years old, he entered the choir of the Great synagogue of Radom and sang the alto part. Progressively, he learned how to read music, at 10 years old became meshorer, and was charged to accompany almost by improvisation the baal tefillah (the conductor of the prayer). 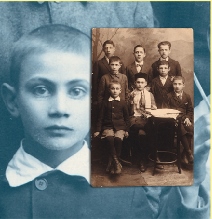 In 1930 he left Poland with his family and settled in France. After a short stay in a primary school of the XVIIIth arrondissement of Paris, he joined the shoe making factory of his father. On the same year he discovered the Great synagogue on the rue de la Victoire, and he was very impressed by the organ, the choirs and the cantor during that time, Mr Henri Kahn.

In 1935 and 1936 he took singing lessons and performed regularly as a solo in the Parisian synagogues for wedding ceremonies. In 1940 he was sent to the front and fought in the Somme. In April 1941 he was married to Sarah Katz. A few months later, the couple found refuge near Roanne. After the invasion of the free zone by the Nazis, Shalom Berlinski entered a small group of Jewish resistance fighters composed of communists and Zionists led by the rabbi Samy Klein. In August 1944 when Paris was freed, the couple goes back to the capital city.

In 1945, Shalom Berlinski attended the music private conservatory René Muable on rue Lepic, where he would follow the vocal technique course of the Italian tenor Umberto Valdarnini, from La Scala of Milan, for 10 years. He also attended singing courses with Maurice Franck, chief conductor at the Opera Garnier.

In 1945 he created the Jewish Artistic Center with the aim of creating and gathering the repertoire of Jewish music and theater.In 1946, he performed Hebrew melodies with the National Orchestra directed by Manuel Rosenthal. 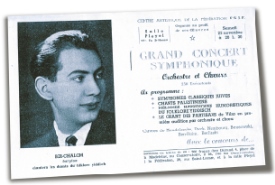 In 1948 he was appointed first cantor at the Synagogue of rue de la Victoire (Paris), a position that he will keep for 31 years.

Between 1953 and 1966, he performed several remarkable concerts, particularly at the Gaveau concert hall directed by Eugène Bigot, and at the théâtre des Champs-Elysées, directed by Pierre Dervaux.

From 1959 to 1962-63, he was a producer at the O.R.T.F. (French public radio) and created with the musicologist Yvonne Tienot and the organ player Jean Bonfils two series of radio broadcasts, “The Bible and the musicians”, dedicated to the musical works inspired by the bible in which he is the main performer.

In parallel with his religious role as a cantor for la Victoire, he taught between 1957 and 1968 the cantorial art at the Israeli Seminary of rue Vauquelin in Paris, and more specifically the singing of the Torah in the Ashkenazi ritual.

In 1979, he stopped being the main cantor at the synagogue of la Victoire, but continued to sing for varied events until 1998. Victim of a glaucoma in 1972, he progressively lost his eyesight. Surrounded with the affection of his wife, son, step daughter and four grand children, Shalom Berlinski dies in Versailles on September 28th 2008.

Listen to the playlist : the hazanout of Shalom Berlinski

Browse our archives on Shalom Berlinski