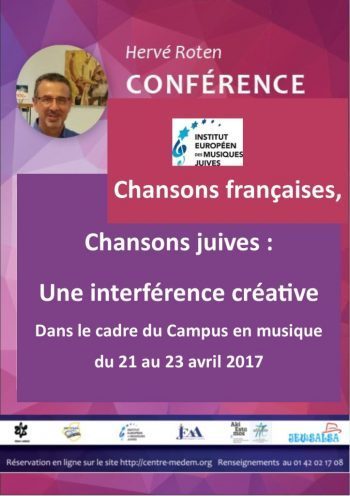 A filmed lecture hosted by Hervé Roten, as part of the 1st edition of “Campus en Musique” organized by the Medem Center Arbeter Ring

As far as we can find a Jewish presence in France, we find all the time meeting points between the Jewish communities and their surroundings.These exchanges took place on different levels: commercial, scientific, linguistic, culinary… but also musical. Therefore, Jewish singers have been influenced by French songs and French singers by Jewish songs.This conference, illustrated with many musical examples, aims to show the creative interactions between French and Jewish songs in the Ashkenazi, Ladino and Judeo-Arabic worlds.