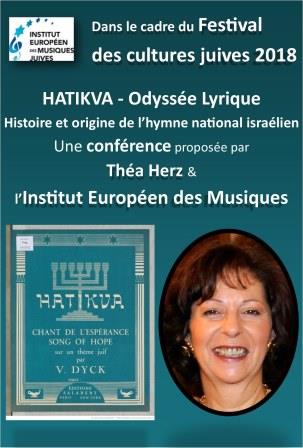 Proposed by Théa Herz and the EIJM, as part of the Festival of Jewish Cultures in Paris

With the help of music, photographies and videos, Théa Herz traces the incredible odyssey of this song which became a vector of the Zionist idea.
If the author of the poem is known (Naftali H. Imber, born in Galicia in 1856), the origin of its melody is a lot more enigmatic. Often thought to be written by the Czech composer Smetana (1824-1884) who uses it in his symphonic poem La Moldau, Théa Herz shows us, with audio proofs, that this melody was heard for over 500 years. We find parts of the melody in several tunes from the church, the synagogue, or in Royal courts of various countries: Italy, France, Switzerland or in Eastern Europe popular music.
This audio-visual conference will end with several remarkable performances of the Israeli National anthem.

Théa Herz grew up in Israel. Drawn to music by her mother, musicologist and music reviewer of several Israeli newspapers, she grew up with Hebrew litterature and songs. For many years, she combines her training of university searcher (MBA at the Tel-Aviv University and PhD of psychology at Paris Université) to the Israeli musical tunes. She therefore consulted works from ethnomusicologists, historians, and gathered archive documents, in order to present them to a French speaking audience.