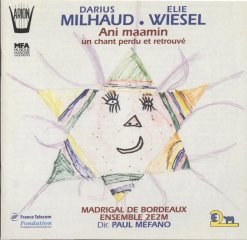 Cantata for soprano, reciters, choral and orchestra, op. 441 on a text by Elie Wiesel

A disc published  in 1994 by Arion, in the MFA (Musique Française d’Aujourd’hui).

This historical recording was made in 1992 on the occasion of the hundredth anniversary of the birth of Darius Milhaud (1892-1974).

Ani maamin is the latest work of this very productive composer (443 works in his catalogue !) who defined himself as a “French man born in Aix of Israelite confession”. This cantata, put on a text by Elie Wiesel, who was deported in Auschwitz at the age of 15, describes the horror of the concentration camps and the martyr of Jews (the father killed in front of the son, the child strangled in his mother’s arms…). But it is also  the expression of a faith opening on eternal questions, which each one of us try to resolve in his own way : responsibility of a God, responsibility.

« Ani maamin beviat ha-Mashiah » means « I believe in the coming of the Messiah ». On Darius Milhaud’s sheet music, we can read these few lines : « It is one of the thirteen principle of faith stated by Maimonides. It’s also a song that, in camps and ghettos, pious and obstinate Jews chose as an anthem. Their faith, instead of comforting soothe the survivors, only confuse them. Affirmation and provocation at the same time, it cannot bring worry. However… ».

Learn more on Darius Milhaud and the cantata Ani maamin