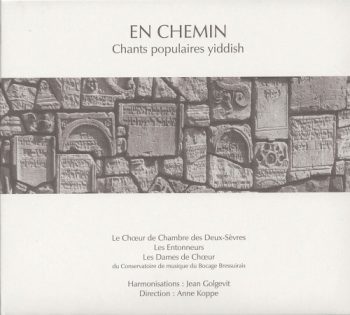 The Chœur de Chambre des Deux-Sèvres has always wished to open itself to music from other cultures and to promote it. The meeting with Jean Golgevit, and the discovering of his harmonisations of popular Yiddish songs led the Chœur de Chambre to appropriate a new repertoire, in order to answer to the particularities of the various harmonisations (mixed voices, male and female choir). The Dames de Chœur and the male choir Les Entonneurs were invited to share the adventure.

Jean Golgevit
Violonist, composer, trainer for choirmasters, he is himself a choirmaster. He created musical pedagogies for adults, conceptualized the Musical Language, an approach which gives keys for understanding a musical score with the voice as the prefered instrument. He then created and brought tools to define and develop the attitude of the choirmaster during the action. He created a new form of polyphonic expression, they are the groups called « Balads » (vocal bands without direction, with an important work of listening), which gives to the singer the full richness of interpretation inside the group.

Les Dames de Chœur
Created 20 years ago in the Conservatoire du Bocage Bressuirais, this choir gathers around 30 women.
Amateur singers open to any discoveries, they had the opportunity to practice together, along with professionals (artists, choirmasters, composers, guests…), the joys and requirements of improvisation, of traditional French songs, world music, romantic programs, contemporary compositions and rare repertoires.

Les Entonneurs
Created in spring 2008, under the impulse of the Chœur de Chambre des Deux-Sèvres, the male choir “Les Entonneurs” gathers around 20 singers. They sing drinking songs and a repertoire that goes from Romantic to traditional songs.

Yiddish songs
The musical repertoire got inspired by secular songs as well as popular dances, simple melodies, with or without lyrics. Mixed by various influences, Slavic, Greek, Turkish, and later by jazz, this music acquired a characteristical diversity and sonority.
These songs are harmonized by Jean Golgevit, who brings an originality to the whole : instead of being accompanied by instruments, they are performed a cappella. Two CD’s (with the Isajoan trio and quintet) and a score collection were edited with the support of the Fondation pour le Mémoire de la Shoah.

Purchase the CD on the EIJM’s online shop 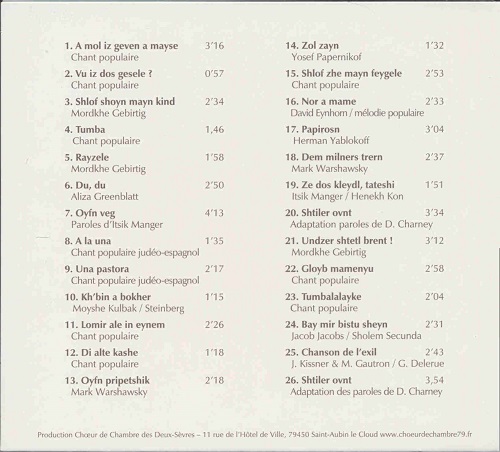