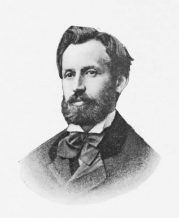 Jules Erlanger was born in Wissembourg (Lower Rhine) in 1830 and died in Brussels on February 15, 1895. He was the son of Israël Susskind Erlander, Rabbi from Wissembourg, and brother of Michel Erlanger, member of the Paris Consistory.

Musically gifted, he was admitted into the Paris Conservatory of Music on October 22, 1844 in the composition class of Fromental Halévy and was awarded a distinction for counterpoint and for fugue in 1850. His attention turned to composition and he wrote several musical works for Jacques Offenbach’s Bouffes Parisiens Theatre, notably L’Arbre de Robinson (1857), Les Dames de Coeur Volant (1859) and La Servante à Nicolas (1861). 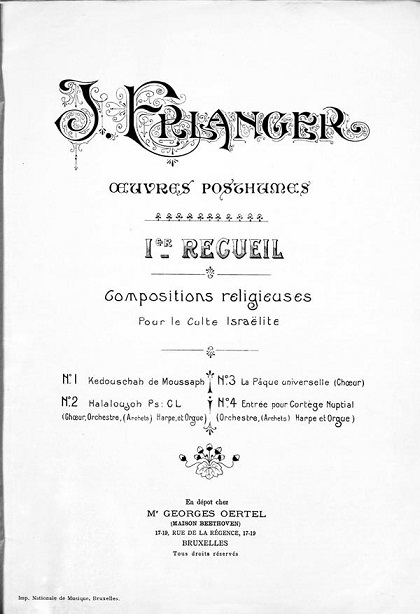 Co-founder of the Society of Dramatic Authors and Composers and a practicing musician, he was equally active in the life of the Jewish community. He participated in establishing the Universal Israelite Alliance in 1860 before becoming president of the Belgian committee of the Alliance until his death. He also composed several musical works for the Jewish religion, among others his Psalm 150 – Allelouya which was played for the inauguration of the Temple de la Victoire in 1874.

Jules Erlanger abandoned his musical career to eventually enter the world of business, and only composed sacred music. In 1891, the publishing house Durlacher in Paris published Erlanger’s Recueil de dix morceaux exécutés dans les synagogues de France et de Belgique (10 musical pieces played in French and Belgian synagogues). In 1903, eight years after his death, another four collections were published in Brussels: three collections of secular music and one collection of sacred music.
The Kedouschah de Moussaph for a four voices choir and baritone soloist included in the CD Jacques Offenbach and friends is an extract from this posthumous collection Compositions religieuses pour le culte israélite.

Browse our archives on Jules Erlanger