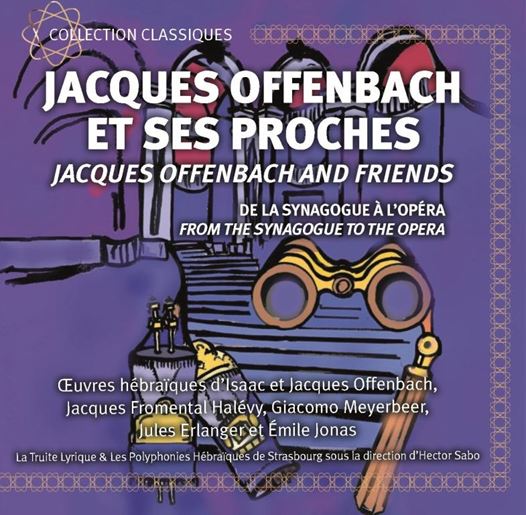 RELEASE OF THE 6th CD IN THE "CLASSICAL MUSIC" COLLECTION

Few music lovers know that Jacques Offenbach (1819-1880), named « the Mozart of Champs Elysées » by Rossini, took parts of his musical inspiration from the synagogal chants that he learned in his childhood, from his father Isaac Offenbach, musician, composer and cantor in Cologne’s synagogue, in Germany.
Since his arrival in Paris in 1833, and throughout his career, Jacques Offenbach would work with other music composers of Jewish origin who, like him, could move with incredible ease from the synagogue to the opera stage, from light music to synagogal chants, abolishing thus borders between genres, in the splendour of 19th century’s Paris.

Published on the occasion of the bicentenary of Jacques Offenbach’s birth, this CD allows us to discover unreleased Hebrew works by Isaac and Jacques Offenbach, Giacomo Meyerbeer, Jules Erlanger, Emile Jonas, and Fromental Halévy, creator of the psalm 130 Mimaamakim [De profundis] ordered by Louis XVIII in 1820 at the Consistoire de la Seine, to commemorate the death of the Duke of Berry.

A wonderful recording, which comes with a 32 pages booklet, performed by the vocal ensemble La Truite Lyrique and the Polyphonies Hébraïques de Strasbourg conducted by Hector Sabo.

This CD was produced thanks to the support of the Fondation du Judaïsme Français, the Fondation pour la Mémoire de la Shoah, the Foundations Henriette Halphen and Irène et Jacques Darmon, under the aegis of the FJF, and the Alliance Israélite Universelle.