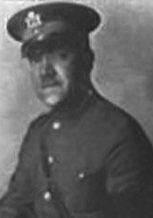 Joseph Frankel was born in Kiev, Russia (now Ukraine). A Kiev Conservatory trained bandmaster and a band leader in the Tzarist army, he toured the US in 1904 leading the 14th Regiment Military Band.

In the early 1910s he led theatre orchestras in New York. When WW1 started Joseph Frankel was touring South America with a Russian Symphony orchestra. He took US citizenship and became a band leader in the US army.

After the war he recorded traditional tunes as well as his own contemporary compositions including ’Yiddishe Blues’.

“Yiddishe Blues” was a 1918 experiment by Joseph Frankel. The piece blends ragtime sensibility in its instrumentation and syncopation, a klezmer melodic line with “Mi Shebeyrekh” in cantorial mode.

By insisting on including the rank of “Lieutenant” in his name, Lieutenant Joseph Frankel sends a strong signal that he belongs to the American nation without ever denying his connection to the Jewish people.

Today, many klezmer groups are taking up his work of musical hybridization.