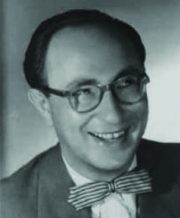 Henri Gerro (Roizman) was born on August 31, 1919 in Rovno (Volhynia Province), nowadays in Ukraine. He began performing on the Polish stage at the age of 12.

After the war, he emigrated to Paris[1]Interview by A. Carmeli in Teater Shpigl [Le miroir du théâtre], ed. Aaron Poliakoff, no.1, p. 12, April 1951., probably after medical studies in Switzerland for a year or two as well as studying dramatic arts in Kiev[2]«Henri Gerro [Henryk Roizman] » http://yiddishmusic.jewniverse.info/gerrohenri/index.html. At the end of the 1940s, he applied for political asylum in France.

Composer and singer, violinist and actor, he performed and recorded between 1947 and 1951, notably with Henryk Gold’s and Bernard Potock’s orchestras. After a two-year contract in Buenos Aires and meeting in 1951 the actress and singer Rosita Londner, who was to become his wife in 1953, he settled in Argentina.

Rosita Londner was born in Warsaw, but her parents had emigrated to Argentina while she was only several months old. In Argentina, she worked for the Mitre Theatre in Buenos Ares and performed with other prestigious Yiddish actors such as Dina Halperin, Mijl Mijalesco, Benzion Witler, Shifra Lerer, Dzigan and Shumacher, Jennie Lowitz, Meier Zelniker and others.[3]«Rosita Londner – biography » http://www.imdb.com/name/nm1428970/bio

After their marriage, Henri Gerro and Rosita Londner, nicknamed “The stars of Jewish vaudeville and music hall”, began performing in numerous countries. They played especially in London and Paris, in South Africa, Scandinavia, Israel, and throughout the American continent.[4]Ibid.

Browse our archives on Henri Gerro