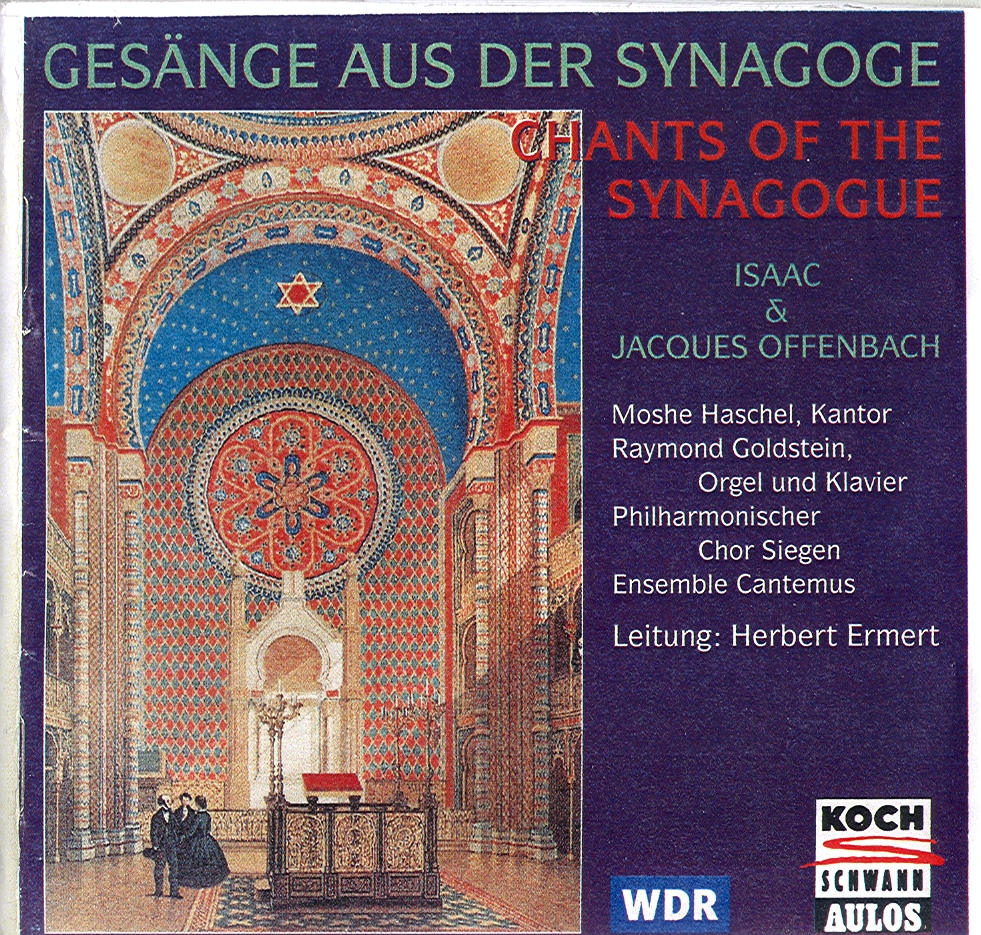 Isaac ben Juda, also called Eberst, is born in Offenbach near Frankfort. After leaving his hometown in 1799 to become cantor and traveling musician, he settles in Deutz as a tavern musician. Due to the Napoleonian decree of July 28th 1808 forcing all the Jews to have a “definite name”, Isaac Eberst takes the name Offenbach around 1810. In 1816 he settles in Cologne, becomes a music teacher, and around 1826, he becomes the town’s cantor, which he will stay almost until his death.
Isaac Offenbach is a prolific composer (mainly works for the synagogue), a writer and translator. He published a Haggada with translation in German and six melodies appended, some traditional tunes and some composed by him (1838), a Hebrew-German book of prayer for young men (1839), and several guitar pieces. His manuscripts have been given by his grand-daughters to the Jewish Institute of Religion New York, and some articles have arrived in the Birnbaum Collection at the Hebrew Union College of Cincinnati, and to the Jewish National and University Library of Jerusalem. That material compounds around 20 booklets and files of cantorial compositions and notations of traditional melodies. These manuscripts show the synagogal style in use in the first half of the 19th century in Germany, characterized by the strong influence of the emancipation and the Western Art Music.

Jacob Offenbach (also called Jacques Offenbach), seventh child of Isaac Offenbach, is born in Cologne on June 20th 1819. Aware of his son’s musical talent, Isaac Offenbach sends him to Paris to study music, the only place at that time where a Jew could have a carrier. In 1833 he is accepted with his brother Julius into the cello class at the Music Conservatory of Paris. After one year in the music school, Jacques Offenbach is forced to leave, his behavior being not satisfactory. In 1835, he enters the Opera-comique’s orchestra and is noticed by Jacques Fromental Halévy (1799-1862), who will give him composition lessons.
His carrier as a composer starts when he writes waltzes, which will quickly give him a certain notoriety. In 1848, due to the revolution in France, Offenbach flees with his family to Cologne. Back in France in 1849, he becomes music conductor at the Comédie-Française. In 1855 he creates his own theater, the Bouffes-Parisiens, located on the Champs-Elysées, to perform his works.
On January 14th 1860, he obtains French nationality. In 1866, during the reign of Napoleon III, he knows great success with his opéra-Bouffe La Vie Parisienne. His following works will also be successes until the fall of the Empire in 1870. Due to the war with Prussia, Jacques Offenbach must leave Paris with his wife and children. But this exile won’t last long, and in 1872, he writes his opera Le Roi Carotte, which is some kind of political satire of Napoleon III. He becomes director of the Gaité-Lyrique theater where are performed his previous works. He dies on October 5th 1880, leaving his opera and final chef-d’oeuvre unfinished, The Tales of Hoffmann.

Jacques Offenbach wrote several songs for the synagogue (Ashamnou, Tavo lefanecha…) composed when his father was visiting him in Cologne. At the age of 16, he also wrote some waltzes with Jewish patterns from the 15th century, called Rebecca (1837, unpublished)