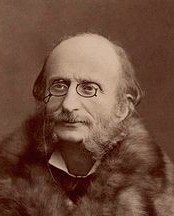 Jacques Offenbach was born on June 20 1819. He was the son of Isaac Eberst (1779-1850) musician and cantor in the synagogue. Native of Offenbach-sur-le-Main, Isaac Eberst adopted the name of Offenbach around 1810, following the Napoleonian decree of July 28th 1808 that forced all Jews from the Empire to take a “definitive name”, in order to facilitate their survey and civil state registry.

Jacob Offenbach (who was later called Jacques Offenbach) started to compose at the age of 9. Cello player and talented musician, he was sent at the age of 14 to the Conservatoire de Musique of Paris, with his brother Julius. At the same time, from December 1st 1833 on, Jacques Offenbach was in charge of the choir of the synagogue Notre-Dame de Nazareth in Paris. He did that just for six months because the rabbinic authorities were displeased by the fact that he played in an orchestra during Shabbat.

After one year in the conservatory, Offenbach was forced to leave it because his behavior was not satisfactory. Later on, he joined the orchestra of the Opéra-comique and attracted the attention of Jacques F. Halévy, composer, who became his teacher. In between, his reputation increased. He wrote several music pieces for the Opéra-comique and performed cello concerts from 1839 on.

He became famous with small melodies, and became musical director of the Comédie française in 1847. He was the creator of the French opera-bouffe. Eight years later, he opened a theater to perform his works: the theater Bouffes-Parisiens, inaugurated in 1855. It is there that was created the first opera-bouffe of Offenbach, Orphée aux Enfers (Orpheus in the Underworld) (1858), which would become a success. His following operas (La Grande-Duchesse de Gérolstein, La Vie parisienne, Les Brigands) were equally welcomed. That period, which is qualified as the “imperial celebration”, in which Offenbach became in 15 years one of the emblematic figures, was brutally interrupted by the French-Prussian war in 1870. Mindful of the taste of the public, Offenbach then focused on the opera-bouffe-féérie (Le Roi Carotte) and then on the patriotic opera (La Fille du Tambour-Major).
Offenbach died a few months before the premiere of the opera which gave him the acknowledgement he was seeking, Les Contes d’Hoffmann (The Tales of Hoffmann) – one of the most performed French operas nowadays.

Jacques Offenbach composed several synagogue songs (Ashamnou, Tavo lefanecha…) written while his father was visiting him in Cologne. He also wrote at the age of 16 some waltzes with Jewish Patterns from the 15th century.