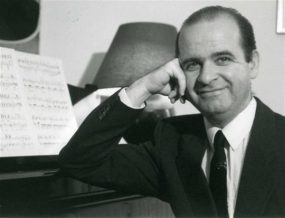 Olivier Greif was born on the June 3, 1950 in Paris. His father studied the piano in Poland before emigrating to France to become a doctor. A child prodigy, Olivier entered the CNSM of Paris (National Music School) at the age of 10, and continued his studies in New York with Luciano Berio.

From 1961 to 1981, he wrote a first series of very personal works, far away from what was in vogue at the time. After a “spiritual research” with an Indian master in New York that lasted nearly 10 years, he wrote, from 1991, a new series of works, intense and dark : « in the last 10 years of his life, Olivier Greif piled up masterworks » (Nicolas Bacri).

He evokes subjects that marked his childhood : war, his father in Auschwitz, the loss of many members of his family in the camps.

Becoming very ill, he passed away on May 13, 2000, at the age of 50. Olivier Greif is starting to be recognized as one of the best music composers of the 20th century.