Hélène Engel pays tribute to Pete Seeger, American musician and pioneer of Folk music. Though he was not Jewish, he contributed to make known Jewish music to the American people with his performance of the Israeli song : “Tzena Tzena Tzena”. He also recorded with Ruth Rubin the song “Tumbalalaika”. 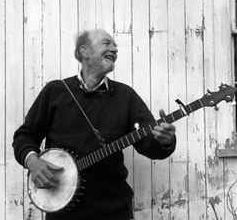