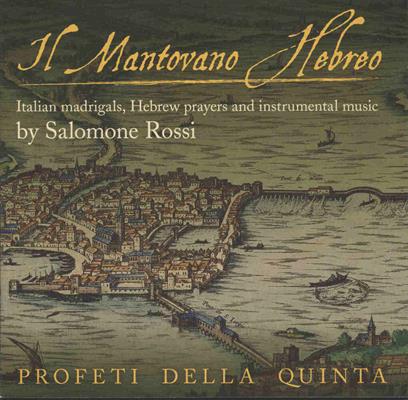 Salomone Rossi is well-known for his famous volume of sacred music in Hebrew, Hashirim Asher Li’Shlomo (1622/3), but he also published four books of instrumental music and nine books of Italian secular. This vast amount of secular music suggests that Rossi played a prominent musical role among the nobility of the city of Mantua, especially at the court of the Gonzaga, where he appears to have worked for most of his musical life.

Rossi’s instrumental pieces would have been performed regularly, in dramatic performances, balls and chamber concerts. Rossi’s first collections of instrumental music contain several pieces for four- and five-parts (as heard in Sinfonia Prima a 5). Following this, Rossi concentrated solely on the newly invented trio sonata combination of two upper voices and a bass. These works included sinfonias in various affetti dance movements (gagliarde, correnti and brandi), as well as sonatas which ventured into virtuoso writing for the violin.

In addition to his prolific secular activity as a Mantuan musician, Rossi, being Jewish, aimed to modernize the music of the synagogue by introducing polyphonic choirs on Hebrew prayers and psalms into the service. The establishment of the Jewish ghetto in Mantua in 1612 probably influenced Rossi for the creation and publication of this new music for the synagogue. The Jews of Mantua, being secluded from Christian society, took the opportunity to look back deep into their own heritage. Thus Rossi—unique in his musical abilities in the Jewish community—created a new genre that was inspired, even if only conceptually, by the music in the ancient temple of Jerusalem.

Rossi’s aim was to ornament and elevate Hebrew prayer by setting the ancient texts to a new kind of music. Rossi follows the accents of the Hebrew declamation, merely adorning it with simple harmonies. Thus, the listener can easily follow the text while enjoying the beautifully delicate music. By using these simple tools, Rossi aims to touch the hearts of the listeners, rather than to impress them.

This CD shows Rossi’s many-faceted talents both as a court composer in the service of the Gonzaga family and as a unique innovator of devotional music for the synagogue. The award-winning a-cappella ensemble Profeti Della Quinta, comprising five core male singers, is joined for this recording by Katya Polin and Eva Saladin (violin) and Ori Harmelin and Ryosuke Sakamoto (theorbo). The native Hebrew speaking singers specialize in the music of the Italian Baroque and have an immediate connection to Rossi as a Jewish Italian composer.