Emblematic figure of the Tunisian song

Born in Tunis in 1911 and deceased in Paris in 2001, Raoul Journo was a singer-songwriter who wrote more than 90 songs in the purest style of Oriental music. A singer with a powerful voice, he specialized in the interpretation of taâlil, songs of praise improvised during family ceremonies (birth, circumcision, bar mitzvah, henna, wedding…). But behind the music, there is the story of a man who had to push fate to escape misery.

Raoul Journo was born on January 18, 1911 in a working class neighborhood of Tunis where Jews and Arabs peacefully cohabit. His family lived in rudimentary conditions. His father, a house painter, barely earned enough to feed his family. And his little sister died of deprivation and lack of care at the age of five. 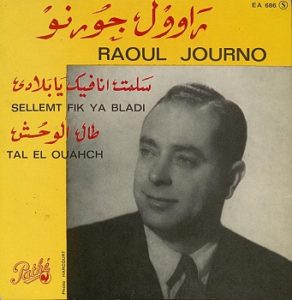 From an early age, Raoul Journo was attracted to music and singing, to the great despair of his mother who wanted him to be a doctor or lawyer. However, it was his mother’s melodious voice interpreting poetry and aroubis (a nostalgic poem sung) that reinforced Raoul’s desire to become a singer. Singing served as an outlet for him to transcend his miserable living conditions.

From the age of 9, every Saturday from 2am, Raoul went to pray with his father in two synagogues. His melodious and vigorous voice singing the Sabbath prayers charmed the faithful, much to his father’s pride. After his bar mitzvah in 1924, he went to synagogue every Monday and Thursday morning. 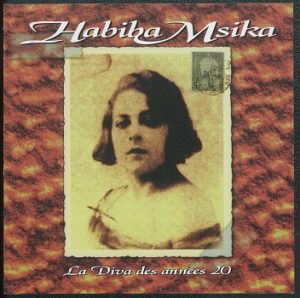 But it is also in the cafés that he became familiar with the tunes and songs of his time. At that time, the owners of the cafes broadcast on phonographs the wax discs of the main popular singers: Chiri El Hassanin, Zaki Mourad, Habiba Msika, Om Kaltoum, Cheikh Salama, El Abedih Chir El Chafti, Abdel Wab… At the Israelite school of Hafsia, he attended – among others – the singing classes of Gaston Bchiri who taught him pieces of malouf, Egyptian, Tunisian and Tripolitan songs. One day, Gaston Bchiri, impressed by the talent of his young pupil, goes to find Raoul’s father to propose that his son accompany him in musical evenings where he is hired. But his father firmly refused. At that time, being a singer was considered a profession of vulgar and depraved people 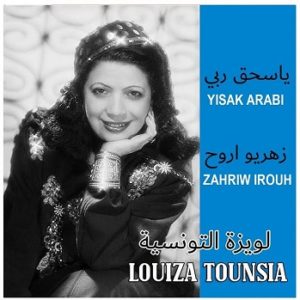 At the age of 15, Raoul Journo was forced to leave school to find a job that would allow his family to survive. For nearly six years, he performed various maintenance jobs while continuing to sing when the opportunity arose. At the age of 17, he acquired an ud (oriental lute) and, without having taken a single lesson, quickly mastered its playing. His fame gradually spread and he got more and more solicited for shows where he sometimes rubbed shoulders with stars, such as Habiba Msika. He also regularly attended Louisia Tounsia’s concerts.

At the dawn of his 18th birthday, Raoul Journo, aware of his talent and artistic possibilities, stopped performing in cafés and gargotes and took singing lessons. At 21 years old, he met Emilie, his future wife, who asked him to give up his musical career. Fortunately, he began to achieve his first successes as a singer-songwriter on Radio Tunis where he was regularly invited. He was then admitted to the Sacem and recorded his first album in 1933 under the leadership of the famous pianist Messaoud Ahbib, conductor and also director of the record company Pathé Marconi. This first record, which met with great success throughout North Africa, propelled Raoul Journo to the top of the bill, allowing him to finally live from his music.

In 1933, Raoul Journo embarked on an ocean liner in direction of Paris. After recording ten songs at Pathé-Marconi, he signed with Polydor for the recording of two new discs, each containing ten songs. Back in Tunis, strengthened by his Parisian fame, he formed his own professional orchestra and married Emilie on June 24, 1934, despite their different social backgrounds.

Their first daughter, Lyli, was born in 1935, but Raoul Journo’s artistic fees – a part of which he paid back to his parents – did not allow the couple and their baby to live adequately. Raoul Journo, who still had difficulty accepting payment for his singing, was forced to continue working elsewhere. At the same time, the Tunisian radio, where he regularly interpreted wedding songs, made him the idol of Arab weddings. The Jews also requested him for the brit-mila, bar-mitsva, henna, weddings, birthdays… 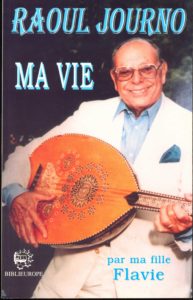 In 1938, their second daughter, Simone, was born. Raoul’s career was at its peak, but the war and the occupation of Tunisia by the Nazis put an end to the concerts. Times were hard and stomachs were empty. At the liberation, Raoul’s artistic activities started again. He was frequently invited by the Bey and the high personalities of Tunisia.

In August 1946 and June 1950 two new daughters were born: Flavie and Dany. Raoul Journo made triumphant tours of Morocco and Algeria. In Casablanca, he performed on stage with Leïla Tounsia and Samy El Maghribi, not far from the cabaret Au coq d’or where Salim Halalli sang.

In 1967, Emilie and Raoul left Tunis to join three of their daughters in Paris. To his great surprise, Raoul Journo began a Parisian career in 1971 with his new orchestral ensemble Ari Bock. He performed at bar mitzvahs, weddings and other Jewish ceremonies, but also on French television, at the Casino de Paris (1987), at the Olympia (1991) and at the Cité Bleue in Geneva (1999).

On August 3, 1980, he was decorated by the Tunisian President Bourguiba with the medal of officer of the order of cultural merit. He was also consecrated Chevalier des Arts et des Lettres, on October 3, 1985, by Jack Lang, Minister of Culture.

Raoul Journo died on November 22, 2001, at the dawn of his 91st birthday. He is buried in Jerusalem and will have composed during his long career over 90 songs, most of which are now available on CD or on Internet.