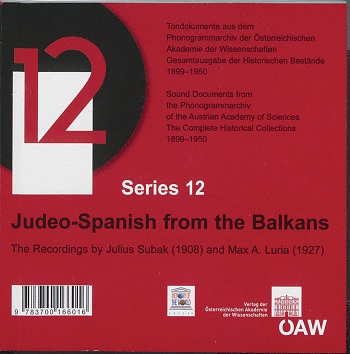 This CD/DVD boxset, including a richly documented booklet, gathers historic Judeo-Spanish recordings from the Balkans. Released in 2009 in the series audio and phonographic documents of the Science Academy of Austria – Collection Full history of the years 1899 – 1950, is edited by Christian Liebl

In 1908/1909, the Balkan imperial Academy of Science Commission considered that Julius Subak (1872-1936), teacher and researcher, specialist of Roman languages, could make recordings of Judeo-Spanish practices in the Balkans. He collected the equivalent of 15 phonograms, which would make the first recordings of Judeo-Spanish (or Ladino), for the purposes of scientific research. These recordings, which gather in particular those from the greatest representatives of the Sephardi community of Sarajevo – such as Abraham A. Cappon, is composed essentially of poems and romances (ballads originally coming from medieval Spain).

In 1927, the American Max A. Luria (1891-1966) began linguistic research in Monastir (today Bitola, Republic of North Macedonia) as part of his PhD thesis. He made 26 recordings gathering proverbs and dialogues, but especially many konsežas (folkloric tales), returning life to this Judeo-Spanish language, so conservative and authentic.

The contributions of Aldina Quintana Rodríguez, Edwin Seroussi and Rivka Havassy as well as Paloma Díaz-Mas underline the importance of these unique audio documents, in particular for the Judeo-Spanish language, but also for the study of Sefardi music and literature. Coming with transcriptions, they form a precious supplement to the audio testimonies of a once flourishing culture, now on the path of extinction. 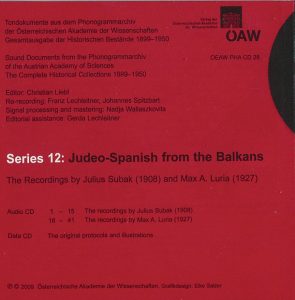