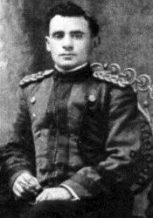 Harry Kandel was one of the pioneers of klezmer, the traditional dance music of the European Jews, in the United States. Together with his orchestra, which featured two cornets, four violins, flute, viola, trombone, tuba, piano, xylophone, and himself on clarinet, Kandel recorded numerous hits between 1916 and 1927, including the much-covered “Night in the Garden of Eden”. A medley, that he recorded in 1926, included a tune that was later recorded by Ziggy Elman as “Fraylich in Swing” and by Benny Goodman as “And the Angels Sing.“

The only member of a family in the lumber business to display musical talent, Kandel studied at the Odessa Conservatory of Music. After serving in the band of the czarist army, he emigrated to New York in 1905. As clarinetist for the Great Lafayette Band, he performed on the Keith-Orpheum vaudeville circuit. He subsequently appeared with Buffalo Bill’s Wild West show.

Moving to Philadelphia, in 1913, he played several concerts at Willow Grove Park with John Philip Sousa’s band. His debut as a bandleader came in 1916 when his group, Harry Kandel’s Famous Inlet Orchestra, appeared in Atlantic City. This led to an invitation to sign with the Victor label. Although most of his recording career was spent with Victor, he recorded several tunes for OKeh and Brunswick. In 1918, he recorded several polkas and mazurkas that he released under the pseudonym Polska Orkestra Tancowa. Opening the People’s Talking Machine Company Store in 1924, Kandel retired from recording three years later to run the shop. Although he never recorded again, he continued to perform concerts and to appear occasionally on Philadelphia radio station WRAX on a show sponsored by the store.

Browse our archives on Harry Kandel