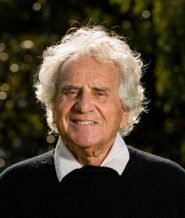 Composer, journalist, producer for radio and television and filmmaker, Serge Kaufman composed numerous scores for radio, television, as well as cinema and the stage. His works stand out for their very personal freedom of expression and their constant lyricism.

Born in 1930, Serge Kaufmann studied classical music at Collège Calvin in Geneva, and then at the Schola Cantorum in Paris, under the direction of Daniel Lesur. In the post-war years, the sight of a photograph – the boy in the Warsaw Ghetto – transformed his convictions towards passionate, internal questioning, this voice becoming ever more insistent: “What would have happened to me if, instead of being born in Switzerland, I had been born on the other side of the border? Would I not have shared the fate of these thousands of Jewish children who didn’t have the chance to grow up simply because they were born of Jewish parents or grand-parents!”

Although never built on purely traditional melodies, his compositions have a sound that is undeniably Jewish.
His vocal, orchestral and chamber music works have been the subject of several recordings.