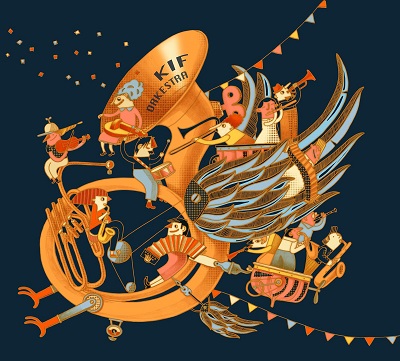 Created in January 2005 on the initiative of the MJC of Ris Orangis, the Centre des Musiques et Danses Traditionnelles in Île-de-France, in collaboration with the ARIAM Île-de-France and the ADIAM 91, the Klezmer Brass band of Île-de-France is born from a dream of a fervent craftsman of the klezmer renaissance in France: the pianist Denis Cuniot. It is he who initially led the brass band, with the trumpet player Yann Martin, member of the klezmer jazz band Klezmer Nova. During 6 years, they made the brass band grow bigger, in the spirit of klezmer music, inviting the public and the musicians to the dance.

Finally in 2014, the Yiddish cowboy Yom, the virtuoso clarinettist famous for his great klezmer playing and free improvisations, becomes the successor. Assisted by the trombone player Benoit Giffard, he brings the band to become freer, more autonomous, and to dream more.

And this is how, thanks to Denis, Yann, Pierre, Yom and Benoit, the brass band, enlightened, shaken, is driven to roll by itself. Created to last just a time, it grew and became the KIF Orkestra.

Learn more on the KIF Orkestra