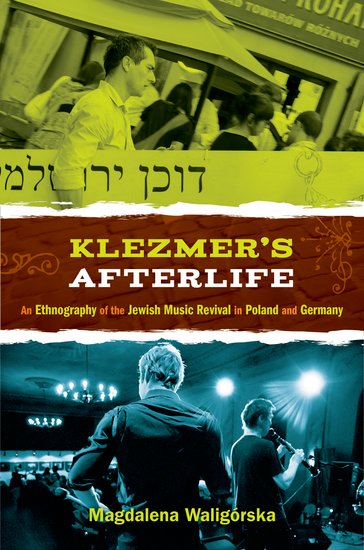 Klezmer’s Afterlife is the first book to investigate this fascinating music scene in Central Europe, giving voice to the musicians, producers and consumers of the resuscitated klezmer. Contesting common hypotheses about the klezmer revival in Germany and Poland stemming merely from feelings of guilt which emerged in the years following the Holocaust, author Magdalena Waligorska investigates the consequences of the klezmer boom on the people who staged it and places where it occurred.
Offering not only a documentation of the klezmer revival in two of its European headquarters (Kraków and Berlin), but also an analysis of the Jewish / non-Jewish encounter it generates, Waligorska demonstrates how the klezmer revival replicates and reinvents the image of the Jew in Polish and German popular culture, how it becomes a soundtrack to Holocaust commemoration and how it is used as a shining example of successful cultural policy by local officials. Drawing on a variety of fields including musicology, ethnomusicology, history, sociology, and cultural studies, Klezmer’s Afterlife will appeal to a wide range scholars and students studying Jewish culture, and cultural relations in post-Holocaust central Europe, as well as general readers interested in klezmer music and music revivals more generally.

Learn more and order this book.