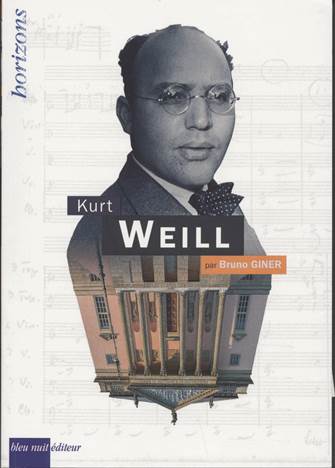 This book brings to us the encounter of atonal music from the beginning of the XXth century and the typically American songs with easy listening melodies, long defended and recorded by his wife, but also completely in the fashions at the time.
This biography, enriched by many illustrations and music examples, is the first one published in French for over 15 years.

An American composer of German origin, Kurt Weill (1900-1950) studied composition, couterpoint and orchestra conducting in the Hochschule für Musik of Berlin. In 1920, he worked with Busoni and wrote his first symphony in 1921.
Always looking for a new language that speaks to the widest possible audience, his language blends modern music (atonal, polytonal, jazz…) that we find in his first operas : Der Protagonist, Royal Palace. His first collaboration with Brecht gives birth to the play Mahagonny-Songspiel in 1927. The next year, this work for piano four-hands leads to The Threepenny Opera that revolutionized musical theatre by striking hard on capitalism and the established order. 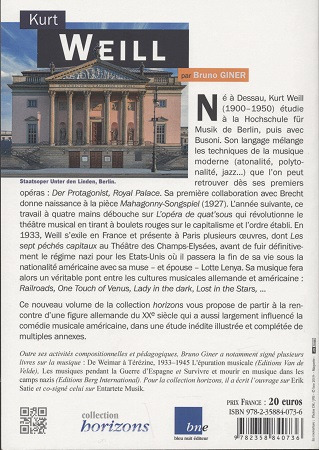 Author of a varied and prolific list of works, Weill went into exile in France in 1933 and debuted in Paris several works, such as The Seven Deadly Sins in the Théâtre des Champs Élysées, before finally fleeing the Nazi regime for the USA, where he will become an American citizen and spend the rest of his life.

The author, Bruno Giner*, presents a panorama of the rich musical production of the composer, endowed with a phenomenal capacity of work, in which appear the major and highly coherent themes: pacifism, anti-militarism, satire of dictatorship, critic of capitalism, of materialism and of racial segregation.
His music is largely influenced by variety and American jazz rhythms : Happy End, Silverlake, Railroads, Lady in the Dark, thus creating a bridge between German and American music cultures. He himself largely influenced American musical comedy.

*Bruno Giner is the author of two books in the collection “horizons” : Satie and Entartete Musik in which he already presented Kurt Weill.