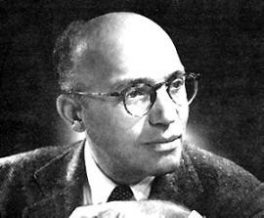 Kurt Julian Weill was born in Dessau on March 2, 1900. He was the third of four children of Emma Ackermann and Albert Weill, cantor in the synagogue of Dessau (from 1899 to 1919) and composer, mainly of liturgical music.

His first composition essays go back to 1913. From 1915 to 1918, he took piano lessons, as well as harmony, composition and orchestration with Albert Bing, chief assistant in the Theatre of Dessau’s court. In 1918, he started to study music at the graduate school (Hochschule) of Berlin. In December 1920, Kurt Weill entered the class of the composer and pianist Busoni, at the Arts Academy of Berlin. He became quickly one of the brightest and most radical students.

Kurt Weill approached his opera projects in 1925 by relying on the revalorisation of the music’s role in theatre, on the notion of Spiel (play). His first collaboration with Bertolt Brecht in 1927 (The Threepenny Opera) was essential for his future work. Engaged in a communist ideal, this encounter changed his way of writing. He said that he wanted to be the « Verdi of the poor » and led his avant-garde expressionist style towards realism. He thus created a new form of popular entertainment : half-way between theatre and opera, his music borrowed from jazz and to cabaret.
A pivotal moment for the composer came when he worked with the Austrian soprano Lotte Lenya, who became his muse and preferred performer. Inseparable, the two got married and the couple became a legend.

In 1933, the Jewish origins of Kurt Weill forced him to flee France. On November 26, 1933, during a concert at the Pleyel Hall where excerpts from Der Silbersee were performed, the composer Florent Schmitt screamed « Long live Hitler ! », supported by a part of the audience. Parisian newspapers went after Kurt Weill, in particular Lucien Rebatet who denounced the « Judeo-German virus » in his newspaper « Action française ».

In September 1935, he left for the USA. A major work of the early years of exile was Der Weg des Verheissung/The Eternal Road, a biblical piece, which presented the history of the Jewish people. A mixture of theatre, liturgy and opera. Kurt Weill then had successes on Broadway, in particular with Lady in the Dark and One Touch of Venus. From October 1941 on, he participated to the war effort by joining the organisation Fight For Freedom ; he gave a civilian service as an air observer in 1942. He also created several works linked to the situation, in particular We Will Never Die, performed in New York and Los Angeles and broadcast over the radio. In 1943, he obtained American citizenship, something he had asked for since 1937.

The most remarkable works of Weill’s last creative time were the American opera Street Scene, which showed an interesting synthesis between European opera and American musical, and the musical tragedy Lost in the Stars, on the theme of the South African apartheid, with a certain African influence permeating the music.
Kurt Weill died of a heart attack on April 3, 1950 in New York, while he was working on the musical Huckleberry Finn, from Mark Twain’s book.

His contemporary, the composer Jean Wiener said about him: “What is unique and remarkable in Weill’s music is that he knew how to write for everyone… but not like everyone does… “

Listen to the playlist dedicated to Kurt Weill

Browse our archives on Kurt Weill

Lotte Lenya sings “Havana Song” (3:25) from the opéra Mahagonny and “Surabaya Johnny” (5:20), from Happy End. Introduction by Aaron Copland who comments the opera in the 1920’s.

In August1928, his opera Die Dreigroschenoper (The Threepenny Opera) knew a phenomenal success. Also, Kurt Weill decided to take the music of this opera and create a suite for small ensemble (twelve wind instruments with two saxophones, timbals, piano and percussion, and banjo).