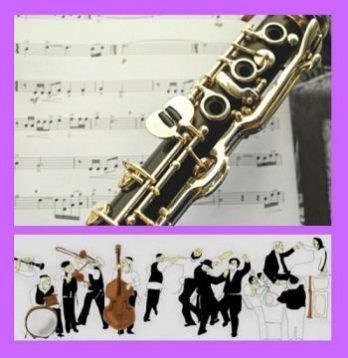 A selection of klezmer tunes where the clarinet is predominent

Naftule Brandwein, Dave Tarras, David Krakauer, Yom, Marine Goldwaser, Giora Feidman, Michael Winograd… So many names that rhime with klezmer music, but even more with one of its favorite instruments: the clarinet !

This musical instrument from the woods family was created around 1690 by Johann Christoph Denner in Nuremberg. Of all wind instruments of its family, the clarinet has the largest tessitura with three octaves plus a minor sixth, constituting 45 notes altogether. It is declined in a family of about 12 instruments that can be transposed for most of them, from the double bass clarinet to the sopranino clarinet, covering thus the full register of a symphonic orchestra.

The clarinet seems to have entered the klezmer bands during the 19th century, following probably its expansion in military brass bands. At the turn of the 20th century, the disc companies encourage the recording of wind instruments at the expense of strings, of which the sound is less powerful, and thus less appropriate for the recording means of the time. This is how in the first decades of the 20th century, the clarinet overtakes the violin and becomes the predominant instrument of klezmer bands.

Klezmer music is strongly linked to Jewish weddings and its many rituals. The clarinet – of which it is said to be the closest instrument to the human voice – borrows the many vocal ornementations of East European cantors, such as the krekhts (whine).

Here is a selection of klezmer tunes, performed by the greatest clarinet players of yesterday and today.