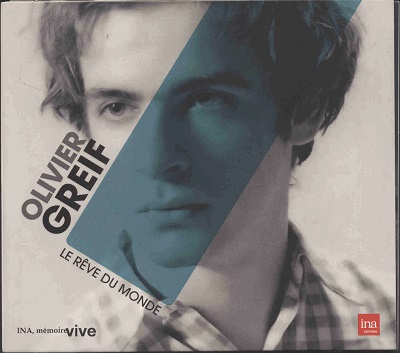 Somptuous piano player, uncomparable composer, Olivier Greif left a beautiful proof of his talent. This program issued under the music label INA Mémoire Vive, entirely dedicated to Olivier Greif, composer and performer of his work, sometimes surrounded by musician friends, compound several creations and one unpublished piece from his youth.

All that makes of this CD a « reference », in this that Olivier Greif’s musical scores have very few indications of tempo, dynamics and character.

With these recordings done between 1962 and 1997, this CD draws a true and unequalled portrait of the work of one of the most inspiring creator from the second half of the 20th century, who died tragically in 2000.

References to the destruction of East European Jewry :

« Le Rêve du monde, composed in 1993, is linked to the awareness of the importance in his life of the memory of his father’s detention in Auschwitz. The representation of the war becomes very dark and is prominent in all his work. Several obsessional motives from the Wagon plombé pour Auschwitz, « direct reference to the Holocaust », in which « the Jewish people is personalized in a synagogal chant », will be played and widened in the Office des naufragés (1997-2000). »
(translation of an excerpt from the CD’s booklet)