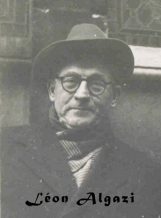 Director of the music of the Consistorial Temples

Léon Algazi was a French composer, conductor and collector of Romanian origin.

Among his many compositions with liturgical or folkloric characteristics, one can recall the Sacred Service (New York, 1954), orchestral suites, psalms, as well as harmonizations of traditional songs.
He published a collection of Sephardic Songs (London, 1958) and has wrote essays on Jewish music in several scientific publications.

Here is a selection of songs composed and sometimes performed by Léon Algazi himself.