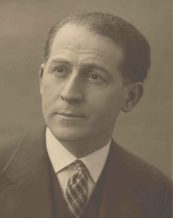 Born in Epuresti (Romania) on February 6, 1890, Léon Algazi displayed a disposition for music at a very early age. After a brief stay in Jerusalem (1905) during which he became acquainted with rabbinic studies, he settled in France (1908) to complete his theological education at the Séminaire Israélite de France, where he finally obtained his rabbinical diploma in 1922. At the beginning of the WWI, he enlisted as a volunteer in the French Army, and then returned to Bucharest in 1915. He left for Austria in 1921 or 1922 to study music with Arnold Schoenberg, and more especially with Hans Eisler. He became the orchestral conductor of the Jewish Theater in Vienna, before returning to Paris in 1924. 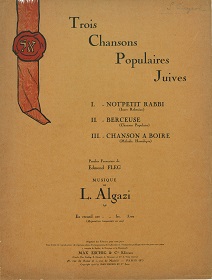 Accepted in the National Conservatory of Music in André Gédalge’s counterpoint and fugue class, he worked on composition with Raoul Laparra and Charles Koechlin. From his studies with the musicologist Abraham Zvi Idelsohn, he became deeply interested in Jewish folklore. In 1925, he published Trois chansons populaires juives on French lyrics by Edmond Fleg (Max Eschig et Cie, Paris). In 1928, he wrote the incidental music for the Dybbuk presented by Gaston Baty’s theater company. In 1929, he created the weekly radio program The Voice of Israel, and at the beginning of the thirties he co-founded with Vladimir Dyck the collection of Hebrew music Mizmor at the Salabert publishing house. In 1937, he becomes the choral conductor of the Grande Synagogue de la Victoire in Paris. And between 1936 and 1940, he teaches Hebraic singing at the Schola Cantorum.

During the war, the Algazi family first sought refuge in Lyon, before slipping into Switzerland on August 9, 1943. After the war, Algazi returned to Paris and resumed his musical activities: choral director, composer, music publisher, 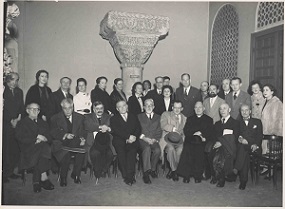 president of the National Union of Orchestra Conductors of Religious Music, professor and director of the Israelite School of Pedagogy and Liturgy of the Séminaire Israélite de France, Léon Algazi is truly a one-man-orchestra! A tireless worker, he wrote numerous articles on Jewish music [1]In one of them, he wrote for instance: “The chant is the soul of the Jewish prayer. Closely intertwined with speech, it sometimes soars, alone, towards the sky, and these ‘flights’ are not the … Lire la suite, organized the first International Congress of Jewish Music in Paris (1957) and initiated, with Léon Pougatch, Jean Halpérin and Edmond Fleg, the first Symposium of Jewish Intellectuals of France.

Appointed Music Director of “Consistorial Temples” in 1965, Léon Algazi passed away on March 1, 1971. He has handed down to posterity a protean body of work still too little known: among the numerous compositions of a liturgical or folkloric character, we may keep in mind the Sacred Service [2]Let’s precise about the Sacred Service that it is a Saturday morning service, as it is celebrated in the liberal or reformed synagogues in France, the United States or in England. It was composed … Lire la suite (New York, 1952), orchestral suites, psalms, harmonizations of traditional songs, and, in a more anecdotal way, his music for the cinema or the theater (Athalie, 1968). As a Sephardic Jew, Algazi also published a collection of Sephardic Songs (London, 1958).

Browse our archives on Léon Algazi