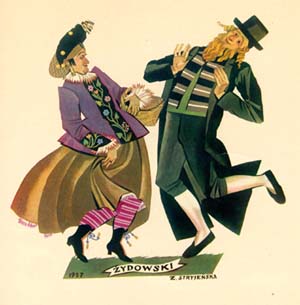 A selection of klezmer music for dancing

Klezmer is an instrumental music for celebrations which was once performed in the Jewish communities of Eastern Europe at weddings or joyous religious celebrations. The word “klezmer” comes from Hebrew kli zemer which means “instrument of the singing”.
Since the 16th century, dancing took largely part in the Esatern Europe jewish celebrations. But no Jewish Askenazi dance was specific to a community : the major part of the repertoire – dances in line, in circle, in couples, etc. – was cosmopolitan or comprised elements borrowed to the non-Jewish environment.

However, the Jews used a body language which differenciated them from the non-Jews who practiced the same dances, in particular in the movements of hands and arms, as well as in the play of legs by the young men.

During weddings, a large part of the ritual consisted in dances that aimed to honor the bride (mitzve tants), the special guests, the step-fathers, the ancestors, the present rabbis… or to mime feelings like anger : broyges tants and reconciliation : sholem tants.

Read the article Klezmer music: from the past to the present