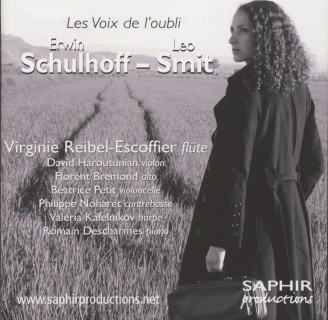 A performance by the flutist Virginie Reibel-Escoffier

Performed by the flutist Virginie Reibel-Escoffier, this disc deals with the times of the musical purge of Nazi Germany (1933-1945), with those musicians-composers, most of them Jewish, who were rejected before deportation and extermination.

Influenced by French music (Milhaud, Roussel, Stravinsky…), Léo Smit (1900- 1943), born in Amsterdam in a Jewish family of Portuguese origin, was confined in the “Jews Theatre” of Amsterdam, before being deported to Sobibor’s concentration camp where he was killed by gas on April 30, 1943.

Léo Smit :
– Trio for flute, viola and harp
– Quintet for flute, harp and string trio
– Sonata for flute and piano