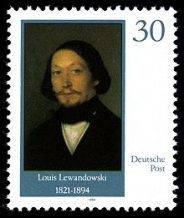 Louis Lazarus Lewandowski was born in Wreschen (Poznan province) on April 3, 1821.
He came from a poor Jewish family and his mother passed away when he was still very young.

At the age of twelve, he left for Berlin to study piano and singing.
He quickly became a solo soprano of the synagogue, for Ascher Lion’s hazzan choir.
Thanks to the support of Alexander Mendelssohn, cousin of the composer Felix Mendelssohn, he joined the Berlin Academy of Music, an institution which did not admit Jewish students, and for three years attended the courses of the composer Adolf Bernhard Marx.
Sick, he did not compose for four years, but began to take an interest in synagogal music.
In 1844, at the request of the Jewish community of Berlin, he created and directed the choir of the synagogue, which became the New Synagogue from 1864.

It is for these synagogues and their choir that he composed a complete religious service with soloists and organ accompaniment.
He also performed many harmonizations with four voices of Hebrew melodies in the spirit of German romantic music, psalms, cantatas, overtures and symphonies.

In addition to these activities, he taught at the Jewish Free School, the Jewish Teachers’ Seminar in Berlin, and established an institute for poor and elderly musicians.
In 1866, the German government awarded him the honorary title of Royal Music Director.