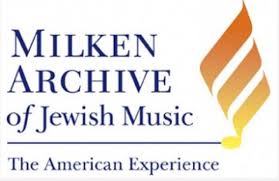 A musical adventure of historic scope and proportion, the Milken Archive was founded in 1990 to document, preserve, and disseminate the vast body of music that pertains to the American Jewish experience. Over the past two-and-a-half decades, the Milken Archive has become the largest collection of American Jewish music ever assembled—roughly 600 recorded works, more than 500 of them world premieres.

Additionally, the Milken Archive’s collection contains over 800 hours of oral histories, nearly 50,000 photographs and historical documents, thousands of hours of video footage from recording sessions, interviews, and live performances, and an extensive set of program notes and essays that illuminate the music’s historical and cultural context.