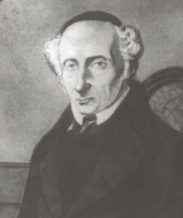 Isaac Eberst, this was his original name, was born in the city of Offenbach on the 26th October 1779. His father was the Schutzjude (protected Jew) Juda Eberst or Eberstadt. His mother’s name was Terz (or Tirza in Hebrew). Both died when Isaac was still a child, and he was probably taken care by members of the Jewish community. No records are available about Isaac’s activities between his 15th and 20th years of age, but one can safely assume that during that time he acquired the cantorial skills and musical knowledge that would eventually enable him to earn his livelihood. He surely learned the minhagim of different Jewish communities when he became, as usual in those times, an apprentice in wandering chazanim trios.

In 1799 he was issued a travel pass, stating that his aim was “to make music in synagogues”. That year he wrote the first liturgical compositions we are aware of. In 1802 he arrived in Deutz, the city on the Rhine opposite Koeln (Cologne). He began earning his living, both performing at Jewish religious services, and as a violinist in dance saloons and taverns. In Deutz, where he was known as “der Offenbacher”, he continued writing liturgical music, and he soon became acquainted with the most respected Jewish families, among them the Rindskopf, whose daughter Marianne (Miriam) he would marry. 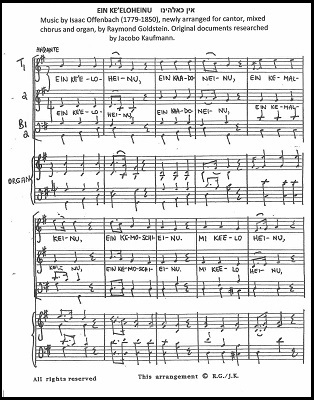 In accordance with the 1808 Napoleonic decree he changed his family name to Offenbach. After remaining several years in Deutz, the young couple decided to establish itself in Koeln, where since the expulsion of Jews in the 15th century, a new community was rising again since the beginning of the 19th century. Living in a modest home on the Griechenmarkt (Greek market), Isaac at first earned his living as a violin, flute, guitar and singing teacher, and he continued composing, but not only for the Jewish prayers. Among his compositions of that period we also find “Douze sonatines pour la guitare”. Around 1820, Isaac began performing with his beautiful tenor voice at religious services of the local Jewish community. After several years he became its permanent chazan, and the family (Isaac, Marianne and their nine children) settled in the cantor’s modest residence at the Glockengasse, next to the synagogue and the Jewish school. For about thirty years, he wrote liturgical compositions for Shabbat and Jewish holidays. Most of those works have been preserved to this day.
On January 29, 1833 Isaac Offenbach wrote the Purim-Shpil with music “Ester, Queen of Persia or The Israelites escaped from Haman’s vengeance”.

In November 1833, Isaac brought his sons Jacques and Jules to Paris. He himself auditioned twice as a chazan at the Rue de Nazareth Synagogue. Jacques was admitted as a cello student at the Conservatoire and Jules received violin lessons from Paganini. Both brothers were engaged for six months by the Consistoire as musical directors of the Synagogue chorus.
Returning to Koeln Isaac Offenbach continued writing religious compositions in the style of the Minhag Ashkenaz. Worried about the decreasing knowledge of the Hebrew language and Jewish matters among the community’s youngsters he published in 1838 the much acclaimed Hagadah, or Tale of Israel’s Exodus from Egypt and in 1839 a Sidur with German poetic translations under the title General Prayer Book for Israelite Youth. 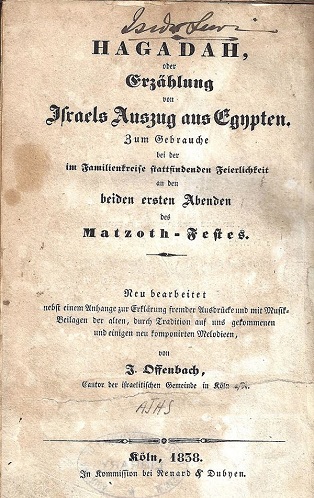 That year he also composed a One thousand year calendar from 1700 to 2700, and German song albums. Despite personal sadness for the loss of his wife and his children Therese and Michel, he continued writing liturgical compositions and Purim songs. In 1848, criticizing the growing Reform movement of Jewish religious services in Germany, he wrote the Humorous Poem of a Polish Mocher Seforim, and the following year, again on Purim, the Humorous Poem of an Antiques Salesman. After thirty years leading the religious services of the Koeln community, Isaac Offenbach died on April 26, 1850.

Most of his musical and literary output was given by his granddaughters to the Jewish Institute of Religion in New York, and some items also reached the Birnbaum Collection at the Hebrew Union College, Cincinnati, and the Jewish National and University Library, Jerusalem. The material includes reminiscences by his daughter, and about 20 fascicles and folders of cantorial compositions and notations of traditional melodies. Over and above their value as “cantorial” antecedents of his famous son’s work, these manuscripts provide both a treasure trove of the “great tradition” of Ashkenazi ḥazzanut and an instructive picture of the development of a ḥazzan at the beginning of the Emancipation.

* Excerpt from CD Jacques Offenbach and friends – from the synagogue to the opera, Classical Collection vol. 6, The Editions of the IEMJ, 2019.