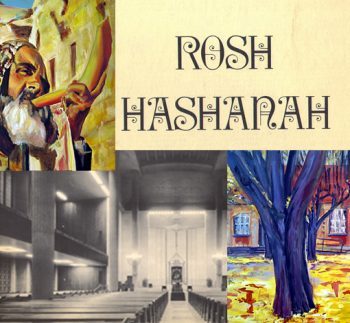 Rosh Hashanah, which means in Hebrew « head of the year », is the 1st day of the Jewish year. Although according to the Torah, the year begins during the month of Nissan, tradition has defined this date as the beginning of the year.

Rosh Hashanah is also called Yom Hadin, the “Judgement Day”, symbol of the creation of men. It is therefore a day of intense prayer in order to call for divine mercy. But it is also a day of rejoicing because we are confident in God’s judgement

During the Morning Prayer, it is custom to blow in the shofar, to remember Isaac’s sacrifice and the mercy God gave him.

Another tradition says that during these days, men should have only “positive” thoughts, and should not feel anger or hatred against one another. Therefore, the first day of the new year becomes an example and a reference for the following days.

Rosh Hashanah begins the period called the 10 Days of Repentance which ends with Yom Kippur, the Day of Atonement