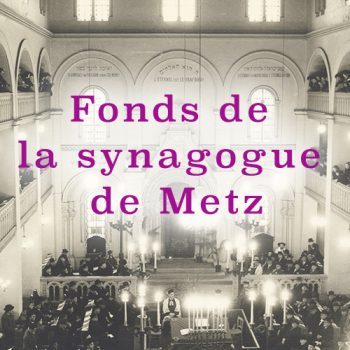 Between June and September 2015, nearly 500 music scores and other documents from the Jewish community of Metz have been digitized by the EIJM, that preserves this way an important part of the French Ashkenazi musical heritage. This project is born thanks to the Foundation for the Memory of the Shoah and the Rothschild Foundation (Hanadiv) Europe

On June 4, 2015, with the consent of yesterday and today’s presidents of the Jewish community of Metz, Mr Patrick Lazarus and Mr Philippe Wolff, as well as the president of the Jewish Consistoire of Moselle region, Jean-Claude Michel, the EIJM recieved in its collections the musical archives of the Great Synagogue of Metz.

These archives comprise mainly hand-written sheet music from the 2nd half of the 19th century until today.
Many of these scores had stains of humidity and moisture, and had to be treated immediately with a special vacuum cleaner for conservation, and put away with professional archives material.

An inventory of this synagogue’s main holding has been done. There are 220 scores. Several are still used nowadays, others have been forgotten. Many of these scores have a german stamp dating from 1870 to 1918.

The filing and the study of this holding required constant musicological supervision. Indeed, many scores were in such a bad state that we sometimes had to put them back together, finding the missing pages and putting them in the right order. This work has been done by Hervé Roten, doctor in musicology and director of the EIJM. 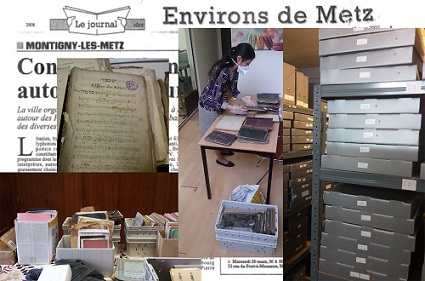 To this synagogue’s holding has been added two collections of private archives that complete wonderfully the archives of the Metz synagogue : the archives of Salomon Binn, cantor in Metz in the 1920’s, and his son Sylvain Binn, director of the synagogue’s choir after the second World War. This main holding has been given by Serge Binn, the son of Sylvain and grand-son of Salomon Binn. It is composed of 230 documents : sheet music, photographies, press articles, posters… Serge Binn helped us a lot by giving precious information about each document.
The second private archives holding comes from the cantor Albert Kirch (1918 – 2016), who worked in Metz from the 1950’s till the 1980’s.

All of these musical archives (around 500 documents) has been digitized by the EIJM during the summer of 2015. These archives are now available on the catalog of our collections (Browse all these archives (synagogue of Metz, Binn and Kirch collections) or by taking an appointment with the European Institute of Jewish Music (contact@iemj.org)